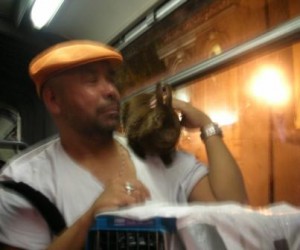 I’m not much of a game player*—mostly because I tend to spend down time** reading or running my mouth—but I of course could not resist telling you about this bus (and train!) game: Follow the Rabbit. (via: Jessica)

As we embrace mobile technology, we are becoming more isolated from each other. The bus/Max/streetcar ride*** once provided an opportunity to meet others, exchange information, and expand our understanding of life. As we plug in, we tune others out. Let’s reverse the trend via a new interactive transit game!

The premise of the game is simple: You get points for transit-based interaction (or behaviors that support it), such as sharing a newspaper or magazine, initiating a conversation, or moving over to let someone else sit down. (You can find the entire, 15-item list here.) The more social behaviors you exhibit, the more points you get.

Of course, I probably wouldn’t do very well at FtR, since I’ve put a bike on the bus exactly twice (well, four times if you count my trip home with the adorable folding bike I won in 2007), and since I’m fairly certain I’ll never, ever (everevereverever) participate in a bus-wide song. I can’t say I even appreciate the concept.

Come to think of it: Many of the behaviors in the game (asking a fellow rider what inspires him, for example, or playing an instrument en route) could be considered antisocial.

But now I’m just being critical.

I love that human interaction—and specifically, human interaction on transit—is the inspiration for this game. Though I probably won’t be playing (I prefer my bus interactions to flow a bit more organically–and plus, it would just provide Bus Nerd with another venue for victory), I’ll definitely welcome offers to sit down (or share a magazine, or whatever) from all of you who do. Cool idea, Albert.

*Exceptions include (in alphabetical order): Spades, Taboo, and Trivial Pursuit
**That is, I did. I no longer have down time.
***Yes, it’s from Portland. Isn’t everything?

1 thought on “Inspiration for introverts”