As a veteran bus rider, I have had to deal with my share of unpleasant travel experiences. Like most sane people, I dislike bad bus rides. But—and I preface this comment by acknowledging that I have a rather unconventional world view—for me, it is often the “unpleasant” bus experiences that reinforce everything I love about the bus.

Case in point: Our Friday afternoon trip home from summer camp at Seattle Center. The kids and I decided that we could not endure one more stop-and-go, 45-minute ride on the 8 (the beautiful* thing about Seattle buses is that they sit in the same traffic as Seattle cars), so we zoomed downtown on the Monorail in the hope we’d find a 27 waiting for us when we arrived. We weren’t fortunate enough to catch our infrequent favorite route, but we didn’t have to wait long for a bus; the 3 pulled up less than a minute after we arrived at the stop.

The bus was standing room only when we boarded at Pine. As we started to make our way to a decent hanging-on point, two passengers in the front got up to give us room to sit together. As I sat with Busling on my lap, Chicklet next to me, and our bags at my feet, more and more people crowded on.

By the time we reached James, Busling was asleep, and Chicklet was engrossed in a comic. I silently thanked the bus gods for what was shaping up to be a complaint-free journey. Unfortunately, they weren’t as kind to the 10 people waiting to board at the courthouse. Though we had long since run out of room, the driver jumped on the mic and asked all of us “channel our inner sardines.” Everybody chuckled and squeezed back farther. We managed to fit three more before he shrugged apologetically and closed the doors.

Those of us fortunate enough to be riding managed to keep our cool, despite being pretty dang hot. I offered to help a man overloaded with stuff and struggling to find space. He slid his backpack under my feet next to our bags and handed me his container of takeout, then looked at Chicklet and said, “I have six of those.” (He meant daughters, not My Little Pony comics, as I originally assumed.) As we crept along, I learned that his children ranged in age from 26 to 10, and one of them was turning 24 that very day. He had already called to wish her a happy birthday.

Everywhere around us, riders were having similar interactions. It was one of those magical rides where folks made room, made conversation, and made the best of things. For the time we were together, we formed a tiny, temporary community.

*And by beautiful, I mean idiotic.

The bus is packed, per usual, so I make my way to the very back and squeeze into one of the sideways seats. After a few minutes of settling in, I break out my current ride read, Hotel Angeline.

The young man in the seat diagonal from mine, who has been holding court since before I boarded, asks, “Is that a good book?”

“It’s interesting,” I reply, and then explain that it was written by 36 different authors, on stage.

“So, what,” he counters, “It’s like the Bible of Broadway or something?”

OK, so the guy was a little bit nuts (wish I had time to share the rest of our conversation) but, he was also a little bit right. One of the things I find most compelling about art is the fact that it has a life separate from its creator. I often hear writers say that a story “wrote itself” or that the characters they created took over a novel. The concept of author as vessel becomes even more meaningful when a story has more than one writer. The story that takes shape from the collective mind of 36 people does not belong to anyone and can therefore convey a kind of truth that’s hard to achieve through a single point of view.

Don’t get me wrong: Hotel Angeline’s no Holy Bible. (For that matter, it’s no Home.) But it does provide an interesting insight into how we create and understand art. We think of writing as a solitary endeavor, but even writers who write alone get ideas from other writers–and from interactions and experiences with the people who surround them. And, of course, the true power of a story is only realized when it is read. In other words, no book is the creation of a single individual; every one is, at least to some degree, a product of the community.

Told you Books on the Bus would spark conversation.

Two middle-aged black men are sitting near the front, discussing job prospects. Somewhere near Harborview, one mentions a position he is particularly interested in, which offers, among other perks, union wages and benefits. The other scoffs.

“Let me tell you something: Seattle has black jobs and white jobs. If President Obama went down there and applied, he couldn’t get one of those jobs.”

At the stop near 8th, the driver gets on the mic and says, “Oops. You went too far.” When no one responds, he looks in his rearview mirror and tries again. “Wasn’t one of you looking for Union Gospel Mission?”

After another silence, several of us begin turning in our seats to see who he is talking to. In the process, our eyes scan the man sitting to my right, who has spent most of the short ride talking loudly on his cell about all the money he’s earned this year, and, in particular, this week.

“Don’t look at me,” he huffs. “I’m a certified public accountant.”

A woman boards at Harborview and immediately announces, “This bus smells like curry and armpits!”

I didn’t smell any curry.

Since everybody’s talking about write-ins… 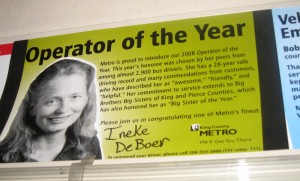 Guess I’m not the only one who noticed what was missing.

Back when I was a young BCiT, I made my grandma mad by (unintentionally) announcing her age to a full 55. At six, I couldn’t understand why she didn’t want people to know how old she was. Even now, I find all the shame and secrecy surrounding the number of years a person has been on the planet to be somewhat difficult to understand.

Folks, I’m no spring chicken. Unlike my father, I can’t claim to predate I-5*, but I am old enough to have a (somewhat fuzzy) memory of the Sonics only national championship. (Sorry, didn’t mean to start down that path again.) I’ve tended to view my advancing age as a good thing, since—for one thing—it’s advancing. (I’ll take being alive plus one over the alternative any day.) It also means I’ve lived enough years to have learned a thing or two—and that I’m inching ever closer to that Metro senior discount. I digress.

Last Friday, on an afternoon 3 ride home from visiting some friends on Queen Anne, little Chicklet passed the time (and entertained her neighbors) by making up a song about us.

*I do, however, hope to outlive it.

This is the first “partial wrap” I’ve seen the wild since the Council approved them two months ago.

Two twentysomething guys are keeping the front section entertained with their end-of-the-workday banter.

Twentysomething guy 1: “Kate Moss rides the bus. Not this bus, but a bus.”

TSG 1, patting his chest: “Yeah–right here. I’ve got a teeny, tiny Kate living in my heart.”

An off-duty driver is sitting in the front section, chatting with the on-duty driver. Both are apparently part-timers who work out of the same base (Atlantic).

On-duty driver: “I’m finally getting enough hours to cover everything; it was a struggle for a while.”

Off-duty driver: “That’s good. It’s always good when you can meet your bills.”

On-duty driver: “Yeah–for a while there they were calling, talking about they were going to ruin my credit. I said, ‘How are you going to ruin something I don’t even have?'”