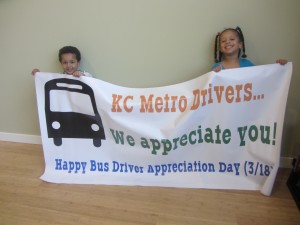 I was still on my hiatus from blogging on February 4th, but the Bus Fam definitely celebrated our shero’s (would-be) 100th birthday.

And, being the postage nerd that I am, I was first in line at the post office for the commemorative stamp. Here’s the first item I mailed with one. 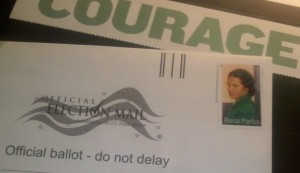 I’ve been leading a charmed reading life of late. Almost everything I’ve carried in my bus bag for the last year (plus) has been worth its (considerable) weight in gold: informative, compelling, inspiring. But even all this good bus reading didn’t prepare me for my most recent ride read, which absolutely rocked my world.

The Rebellious Life of Mrs. Rosa Parks, by civil rights scholar Jeanne Theoharis, is the most comprehensive—really, the only—political biography written about my sweet Chicklet‘s namesake. It is the book I would have written myself, had I more impressive credentials and initiative.

There is so much to learn from Theoharis’s research, even for someone who has read essentially everything available to read by (and about) Mrs. Parks. Rebellious Life examines the Rosa Parks beyond the fable. It explores her lifetime of activism—including her half century in Bus Nerd’s hometown of Detroit—and all of the ways she contributed to the struggle for freedom and justice. I am in awe of the depth of her sacrifice and commitment to her ideals. As Theoharis says in the book’s introduction:

It is a rare gift as a scholar to get to deconstruct the popular narrative and demythologize an historical figure, and in the process, discover a more impressive and substantive person underneath.

This, of course, means you’re in for many more (and more substantive) Parks-related posts in the future.

Today my transit-obsessed colleague (who also happens to be Catholic) sent me this Huffington Post piece, which shares a few fun facts about the newly selected Pope. Fun fact #3 …

He rides a bus to work, and gave up his chauffeured limousine, wears an ordinary priest’s robe and lives with an older priest in a simple apartment where he cooks his own meals, rather than live at the luxurious residence he was entitled to as Archbishop of Buenos Aires. 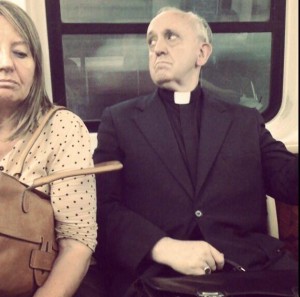 Bus riding is often used as evidence that someone is making a sacrifice, and this description of Pope Francis is no exception. Leaving aside the fact that it is perfectly appropriate for a man who has devoted his life to God to not ride in a chauffeured limousine, it’s also perfectly possible (in fact, probable) that he actually likes riding transit. And this possibility makes me inclined to like him. (Actually, either possibility makes me inclined to like him.)

Bus Driver Appreciation Day is around the corner–March 18th, to be exact. Don’t forget to show your bus drivers some love.

Not sure how to express your appreciation? Here are a few tips.

1. Say “thank you.” Many of us already take the time to thank our drivers as we get off the bus. (These days, the rear exit system in King County makes this more difficult for KC Metro riders, but some of us still shout it out.) On the holiday, make a special effort to thank your drivers when you board the bus. Something simple like, “Happy Bus Driver Appreciation Day,” or “Thank you for your service,” is all it really takes to acknowledge your drivers’ hard work—and maybe even make their day.
2. Be a good bus citizen. Make your driver’s day easier by helping someone on or off, giving up your seat for an elderly or disabled passenger without being asked, or picking up trash if you find some near your seat.
3. Submit a commendation. If your bus driver does a great job, let the agency know. Commendations are tracked, included in drivers’ files, and are often considered as part of operator of the month/year decisions. Most transit agencies have an easy way to do this through their website. Or, simply pick up the phone and call.
4. Put up a sign. Create a handmade sign or banner to put up somewhere along your favorite bus route. That way, all the drivers who cover the route will feel the love.
5. Give a small token. Some agencies have policies against giving drivers gifts, but we’ve heard from a number of drivers that cards and small, edible treats are very much appreciated.

If I get Smooth Jazz on Monday, I’m giving him this. 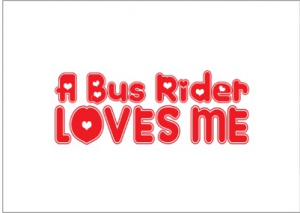 I realize I’m extra late, but since about a zillion people sent this link to me while I was on my blogging hiatus (see yesterday’s post), and since it is relevant to both my world view and my own experience, and since it shows that folks in Washington State (and apparently, Oregon, New York, and New Jersey) know what’s up, I am sharing anyway.

The most common “Missed Connections,” by State: 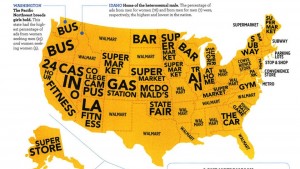 Might be time to take out those ear buds, people.

This month marks the 10-year anniversary of my full-time relationship with Metro. The milestone snuck up on me, which is actually a good thing, since I’m not in the mood for a retrospective, and I don’t have any wise words about what I’ve learned in a decade of living, working, and parenting without a car. Honestly (in case the five full months without a post didn’t clue you in) I haven’t felt much like writing about the bus at all.

What’s on my mind most of the time is how our family is going to continue to make this bus life work. We’ve lost a lot that we counted on: two of our nearest bus stops, frequency and hours of operation on two of our most-used routes. If the legislature decides–for the fifth year in a row–not to let local communities decide how to fund their own transit service, we stand to lose much, much more.

And we’re not the only ones. All over the state, people are losing transit service they rely on, while we profess a desire to care for our most vulnerable citizens and wring our hands over global warming, air pollution, and ocean acidification. The fact that transit advocates have to scrap and hustle (and beg) just to get enough money to preserve basic bus service leaves little hope that we will ever find the will to make the long overdue, revolutionary changes our transportation system desperately needs.

So the thing is, I’ve been tired–of trying to make things work with diminished access and diminished service, and of fighting an uphill battle to fund transit statewide. I allowed myself to feel discouraged. And really, really angry.

But then, I had coffee with Christine.

Like me, Christine is a bus chick. Unlike me (knock wood), Christine is expecting. Earlier this year, she contacted me over the internets to pick my brain about busing with babies, and I was more than happy to share what I know. I suggested meeting for coffee, because I knew she’d never read the 300 pages I would have typed if I had shared my thoughts over email. I don’t like to brag, but if there was such a thing as a PhD in riding transit with kids, folks would be addressing me as Dr. Bus Chick.

At some point during our conversation, Christine remarked on the relative dearth of negative posts on my seven-year old blog and noted that I almost never write about the challenges of bus parenting. I do intentionally try to keep my blog positive, but until my chat with her, I hadn’t really considered why.

It’s not that there aren’t challenges (are there ever!). It’s not that I am trying to paint an unrealistic picture of what it is like to parent without a car. It’s not even that I have an optimistic nature (see above). I tend to write about the positive side of carfree parenting because the challenges of living this way are already known—or at least, they are imagined.

There is a reason why so many people think I’m crazy. Why I’ve been interviewed for TV and radio for doing something that thousands of parents in this county do every single day. Why, after a decade of watching us live this way, friends and family still regularly offer us rides. It is because most people who have a choice would choose differently. This means they have already considered, imagined, and just plain made up all of the reasons why it would be stressful and inconvenient to try to get around with two kids and no car.

What most people haven’t considered is just how exhilarating, bond-enhancing, and three-dimensional it is to ride the bus with your children. How your kids get to experience their city from ground level. How they come to know each season intimately. How they run into church members, neighbors, school mates, family friends, and medical assistants from their pediatrician’s office. How so many of the regular drivers recognize them and give them suckers and transfers and high fives. How they learn every sidewalk crack, every overgrown bush, and every window display in your neighborhood. How they love the silly games you make up to pass the long waits. How you have time to read them so many books that soon they are reading books to you. How you can hold them close and talk in their ears and smell their hair while all of you zoom past the Space Needle, or across a bridge, or through a tunnel.

That is what I write about because that is what I know. It is why I ride. And it’s why I never stay tired for long.