My most recent bus read was the autobiography of OG Detroit activist, Grace Lee Boggs. Come to think of it, it was the bus read before last; I finished Home last week. (I’m currently experiencing some rather extreme Toni Morrison withdrawal and am still carrying it around in my bag.)

Among the many things I learned when reading Ms. Boggs’ book is that this amazing song exists.

I realize that it isn’t December 1st (or February 4th), but I couldn’t wait that long to share this. And really, is it ever a bad time to acknowledge the power and significance of the Montgomery Bus Boycott? Right. Moving on…

“Alabama Bus” was recorded in 1956, at the height of the year(+)-long boycott. The artist, Will Hairston, was a friend of Grace and her husband, James Boggs. Mr. Hairston, also known as “the Hurricane of the Motor City,” was an auto worked and preacher who was deeply involved in the struggle for social justice and economic equality.

Thank you for your contributions, Brother Hairston. And, as always, honor and respect to the Original Bus Chick, Mrs. Rosa Louise McCauley Parks.

I originally posted this in May of 2010, but it’s been on my mind lately, for a number of reasons. Wishing peace and comfort to all who have lost loved ones to violence, including (and especially) the violence of war.

On a recent Wednesday, I got to talking with the man in line in front of me at the grocery store. He was an older man, probably a good decade older than my father, and he showed a lot of interest in Busling. His eyes lingered long after the initial “Look at the baby!”, and he asked lots of questions–the kind asked by people who are missing the days when their own were still tiny. So, to keep the conversation from being completely one-sided, I asked the man if he had children.

He told me a few of the details–that it was a robbery, that his son had been counting his recently cashed paycheck in the back and then had refused to surrender the money to the gunman who demanded it. That it was the first ever murder on a Metro bus.

We talked a bit longer–about his grandchildren (who live in Portland but visit him often), and about how he wished his son had used better judgment on that April afternoon 23 years ago–and then went our separate ways.

Our encounter didn’t last longer than five minutes, but I haven’t been able to stop thinking about it. About all the hours and days and years that kind man had spent loving his child, watching him learn to smile and laugh and roll over and crawl; discovering his preferences, his quirks, his weaknesses, his gifts; attending games and graduations; giving advice about important tests and first dates.

I felt compelled to honor his loss by learning all I could about his son–not about the way he was killed, but about who he was, what he cared about, and who would miss him. Here’s what I know:

His name was Larry Curtis Walker. He was 30 when he was killed, an employee at The Plush Pippin at Southcenter. According to his boss, David Jensen, he was wonderful to work with.

“Larry sparkled with integrity and loyalty,” he said in a PI interview a couple of weeks after the murder. “[He was] the best employee I’ve ever had.”

Larry left behind two children, a son and a daughter. His son was six when he died. His daughter, from what I could gather, was younger. Many people knew and cared about Larry, including parents, students, and staff at his son’s school. They started a memorial fund (administered by David Jensen) for his children.

And he had a father who loved him dearly. 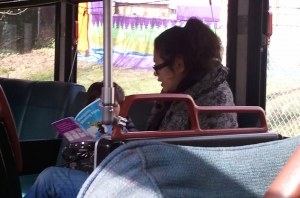 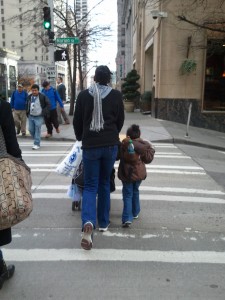 Much love on this holiday to all my fellow bus moms. 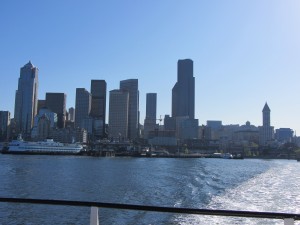 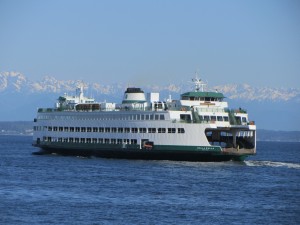 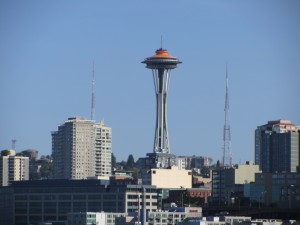 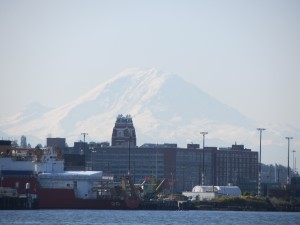 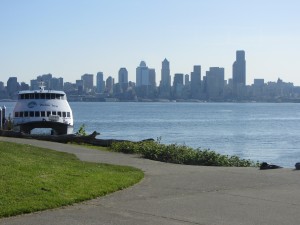 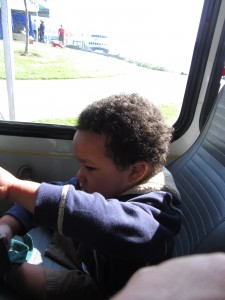 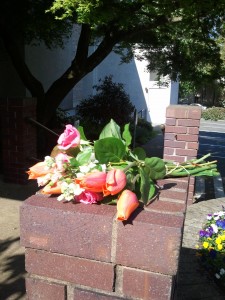 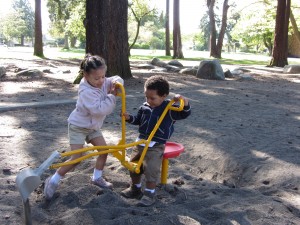 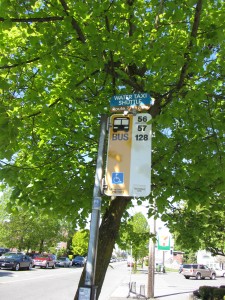 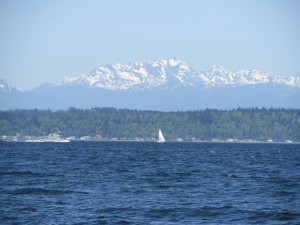 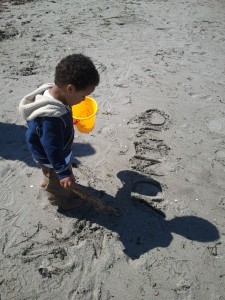 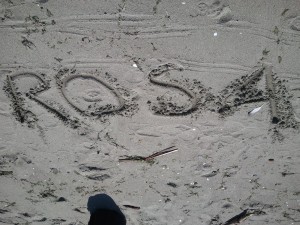 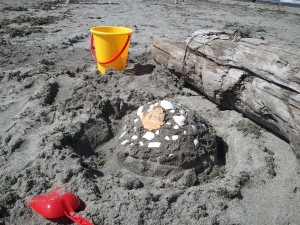 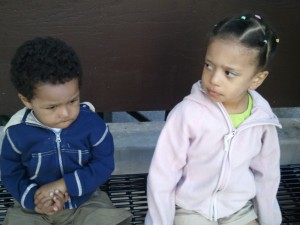 Remember that bus scroll Bus Nerd and I bought last fall? Well, it was pretty big, In fact, it was close to as tall as me and possibly as heavy (OK, not quite), and the place we wanted to hang it was kind of tricky to reach. Plus, we’re lazy and busy working and parenting two small people and have just barely, after over a year and a half, gotten around to hanging the pictures we moved to this place with. So, the cool bus scroll sat on the floor of our bedroom for months upon months, forcing us to expose visitors to the chaos of our personal space in order to show it off.

Fortunately, our neighbor, Mark, happens to be down with some cool, museum worker types who actually hang pictures for a living. He hooked us up, and the lovely lady and gentleman came over and helped us put it up. The scroll looks great, but, despite all evidence to the contrary, that’s not what this post is about.

This post is about a man named Josh, one of the cool people who helped us hang our picture. Josh is a self-described “transit and history buff,” and he really liked our scroll. Josh doesn’t own a car, and the story of how he came to be without one is one of the best I have ever heard.

In addition to being a picture-hanging expert, Josh is also an artist and therefore tends to spend time in the company of other artists. One of these other artists is a very talented portraitist. Josh really wanted this person to paint a portrait of his elderly grandfather, but (being an artist) he didn’t have the money to pay for it. What Josh did have was a car that he rarely used; living on First Hill, he rarely needed it. So, he offered an exchange. The talented portraitist got some (not-so) new wheels, and our history buff got an enduring reminder of a man who has had an immeasurable impact on his life.

I think we know who got the better end of that deal.