As I mentioned a few months ago, one of the most thought-provoking books I’ve read in years is The Rebellious Life of Mrs. Rosa Parks, by Jeanne Theoharis. I underlined so much of the text that the parts that are not underlined now stand out, but one passage in Chapter Five made a special impression. I think of it almost daily, and it has profoundly influenced the standard I set for myself as a person who claims to care about justice.

A community of black people and a smattering of white allies looked that old order, that terror, in the eye, day after day.

What makes this difficult to fully appreciate is that certain core precepts of the boycott have subsequently been adopted as common sense: that segregation was a systematic apparatus of social and economic power and that resistance to it was possible. Most Americans now look back in the glow of that new truth, assuming that they too would have remained seated, written letters to the local paper, risked their jobs to print 35,000 leaflets, or spoken out in favor of boycotting the buses.

If we tell ourselves that we would have stood up (or sat down) in 1955, then we must ask ourselves in what ways we are standing up right now, in the face of all of the injustice that is happening around us: racism, poverty, income inequality, mass incarceration, the destruction of our communities and our planet.

Are we shaking our heads and wishing things were different? Are we allowing ourselves to be convinced that our goals are unrealistic? Are we asking for less than real change because of politics or what we think we can “get”? Are we holding our tongues or staying home because we are afraid to jeopardize our material possessions or social position?

Or, are we gathering our courage, risking rejection and ridicule, sacrificing (short-term) self-interest, and actively working toward change?

Thank you, Ms. Theoharis, for reminding me to do better. 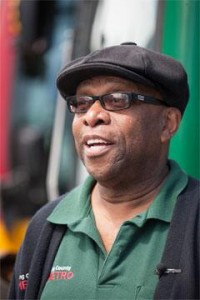 The 2012 OOY is Robert Duncan, a(nother) Seattle OG and 30-year Metro veteran. Mr. Duncan is apparently a “smooth operator” (though not the smooth operator) who drives the 311.

“Robert joins Metro’s elite group of top drivers – the best of the best,” said King County Executive Dow Constantine. “He knows the system inside and out, and customers appreciate and depend on his reliability and helpfulness.”

Duncan is a Redmond resident who works at Metro’s East Base in Bellevue. He was born in Seattle and attended Roosevelt High School, North Seattle Community College and the Washington Police Academy. He first joined Metro in 1977, and drove part- and full-time routes in three stints spanning about 30 years. He recently earned a 28-year safe driving award.
These days, Duncan drives Route 311 part-time. That means his “decades of experience and knowledge are still on the road, and that’s a big benefit to customers,” said Metro Transit Operations Manager Jim O’Rourke.

Commendations and kudos from customers and colleagues say Duncan is a “smooth operator” who “does a great job” and “is a plus for Metro.”

To be a good bus operator, you have to be a people person, said Metro General Manager Kevin Desmond. “Robert exemplifies Metro’s 2,700 drivers – he’s a driver who loves his job and cares about our customers.

Congratulations (and thank you!), Mr. Duncan.

A sixtyish man is sitting in front of me, looking out the window as we creep up James. We pass a handful of people standing on the sidewalk near the jail. Among them is a black priest.

The man snorts in disbelief. “Why would a black person take a vow a poverty? We’re born poor!”