Every single seat on my “low productivity” route is taken.

Rollin’ to the pool for swimming lessons: 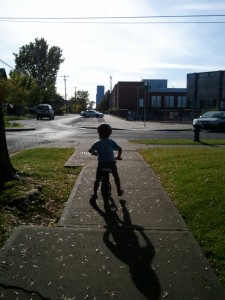 He loves that little bike so much, he’s getting me exciting about cycling. Look out, Bike Month!

Two days into the reality that King County’s transit system is about to return to 1997 levels of service, I find myself too overwhelmed to say anything coherent on the subject.

Since election night, I’ve been spending a lot of time thinking–about how 60 years of social engineering, influenced by a handful of greedy corporations, can create a transportation system that requires people to be able bodied, within a certain age range, and capable of spending many thousands of dollars per year just to have basic mobility.

I’ve been thinking about how a transit agency can be put through the ringer, its finances audited and scrutinized from top to bottom, in order to be granted the right to restore funding that was stripped away by an anti-tax crusader. Then, when that agency is found to be operating soundly, the media call for more “reform” instead of more money. Voters believe them.

Meanwhile, road projects all over the state are mismanaged and bleeding our tax dollars.There are no ballot measures to ask us if we want to pay the bill.

I’ve been thinking about how this state of professed progressives creates task forces to talk about pollution and global warming and pays lip service to social justice but can’t make one single transportation decision the reflects these professed priorities.

I’ve been thinking about how ridiculous it is that in 2014, in this growing, prosperous, innovative county, we’ve had to fight so hard–and for so long–just to preserve a basic bus system.

The thing is, I’ve been thinking about this stuff too much.

Stress about transit cuts has sucked the joy out of the bus for me. How can I write about the cool chick with the “Blasian” t-shirt on my late-evening 27 when WE’RE ALL ABOUT TO LOSE OUR BUSES? It feels frivolous. Worse, it feels irresponsible.

I don’t want to be frivolous or irresponsible, so for eight months, I’ve been silent.

I miss coming here to celebrate buses and trains. I miss telling you guys what I’ve experienced, on the ground, in the seats, and at the stops. 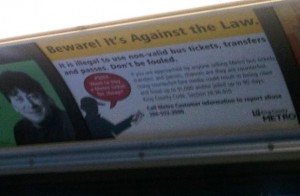 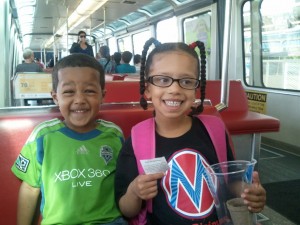 Chicklet’s on spring break and so spent the week at camp at Seattle Center. We usually ride the 8 to that part of town, but this week, we decided to mix it up.

I remember when riding our city’s crusty, nearly useless tourist train made me smile just as big.

Since the last time I posted (in August—ahem), the Bus Fam has been through a few transitions.

For one thing, Chicklet started kindergarten (!), moving us to yet another stage in our bus lives: parenting a school-age kid.

At some point, I will share more extensive thoughts about our experiences so far. For now, I’ll say we are extremely fortunate that there is an amazing preschool on site at Chicklet’s elementary school. Having one drop-off is helpful to all parents; it is the holy grail for bus parents.

We live too close to the school to qualify for a yellow bus, so we walk the half mile both to and from. The route I catch from there to work comes every half hour at peak, so timing can be tricky. Also, there’s weather. But the frantic morning rush and occasional drenching downpours are more than made up for by the joy of spending the beginning of each day on the ground in our neighborhood, hand in hand in hand.

To solidify her full-fledged kid status, Chicklet went and turned six (sniff!), which means she has reached official fare-paying age. (More on this in a later post.) We bought her an Orca card of her own for her birthday, and she wears it on a lanyard as needed. (Otherwise, it’s stored in my bus bag.) The first time she used it was on an 8-ride to Seattle Children’s Theatre, to celebrate her birthday with her oldest friend.

Sweet “baby” Busling grew all the way up; he’s four these days (!!!). On our morning walks to school, he likes to pretend we’re a family of animals—dolphins or lions or cheetahs or ponies—which can be helpful when we’re in a rush. (I’ve never heard of a slowpoke cheetah.)

I marked another anniversary of living without a car—11 years last month. Apparently, I owe Metro jewelry or something made of steel.

Me? I don’t need anything–other than for my buses to keep running, that is.

If this month’s emergency ballot measure fails, and Metro is forced to make cuts, our family will lose our three most-used routes. Two of our remaining regular routes will be reduced. Only one will remain untouched.

These are not minor inconveniences that require slight adjustments. This is a wholesale dismantling of the bus system as we’ve known it.

Unlike many people who will be affected by the cuts, Bus Nerd and I have the option to buy a car. (By that I mean, we can afford one, we are able-bodied, and we know how to drive.) I have tried to prepare my mind for this possibility and have found that I am completely incapable of imagining it. Not to get all Thelma and Louise, but something has crossed over in me. This bussin’ birdie can’t go back in the car cage.

But not wanting to live a particular way is not the same as not being able to. If we cut bus service, we will cut off basic mobility for thousands of people across the county who don’t have the luxury of deciding whether to buy a car. We will take away people’s access to employment, education, health care, and vital community connections. We will marginalize our elders and our youth, our neighbors and friends with disabilities, and people who don’t happen to have $8,000+ to spend on transportation every year.

And “vulnerable populations” aren’t the only ones who are vulnerable. All of us, no matter how we get around, breathe the same air, drink from the same water supply, and suffer the effects of our warming climate. All of us pay the health, economic, and environmental costs of our car-dependent culture.

I am hoping hard that the citizens of King County do the right thing next Tuesday–because we simply cannot afford not to.

There There, by Tommy Orange