Last Thursday, I barely missed the 8 on my way home from an errand and so found myself alone at a bus stop, loaded down with potting soil and live plants and with a decent wait ahead of me. It was one of those close-to-the-road stops with no shelter or bench or trash can, only a damp ledge in front of a nearby apartment building. I dropped my load and sat on that ledge, feeling restless and ready to get on with my day.

But on this particular Thursday, I decided to push through the restlessness. To not sink into a book or my phone or some other distraction to “kill” the 12 minutes OneBusAway told me I’d be there. Instead, I sat on the ledge and waited.

It’s October, so the trees were showing off, alive with that fleeting explosion of color that always feels like magic. The leaves were falling, not in big clouds like they do on windy days, but one at a time. The maple tree closest to my ledge released each leaf gently, like a mama bird pushing her baby out of the nest. I felt like I was part of something sacred as I watched each one drift to the dirty street.

Those twelve minutes I spent waiting have as much to do with why I ride as the extra time to read and connections with fellow humans. After all these years, my life on the bus continues to transform me. It reminds me that I am not in control, even if these days the waits are shorter and we have tools that can tell us just how long those waits will be. It teaches me to cherish the moments life offers me to simply be still.

And watch a bright orange leaf sail into the gutter. 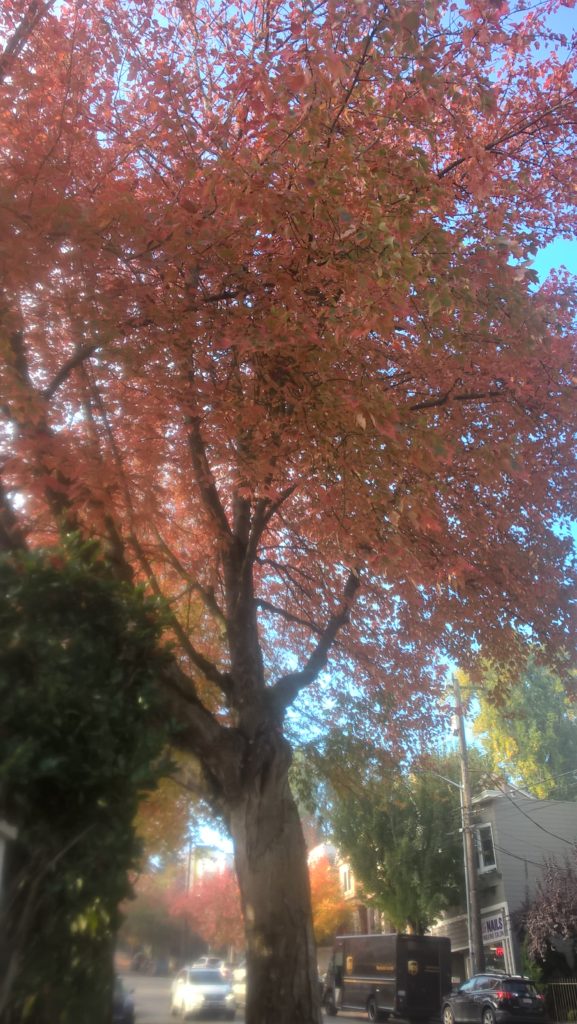 Chicklet, Busling, and I are waiting for a slightly late 27/17 to visit my brother in Ballard.

Chicklet: “I wish the bus would do certain things.”
Bus Chick: “What things?”
Chicklet: “Take us to Uncle Jeremy’s house right now.”

Somewhere on Dexter, we get a great view of Busling’s favorite building out our window.

Eventually, another building blocks his view.

Older gentleman waiting nearby, after some initial pleasantries: “You in love with somebody?”
Bus Chick: “I’m married.”
Older gent: “That’s not what I asked.”

A high-school age boy and girl, both carrying instruments (and presumably just leaving band/orchestra practice) are passing the time while waiting for the 48. They call a few friends who are also waiting for the 48 several stops north, then spend a few moments discussing whether they missed it or it’s really, really late. This apparently reminds the girl of a recent adventure.

Band Nerd Girl: “Last summer, when I was in Israel …”
Band Nerd Boy: “Dude, are you Jewish?”
BNG: “Yes.” [long pause, long sigh] “But just ’cause I went to Israel doesn’t make me Jewish.”
BNB: “Oh I know. But well, if you went to Israel and you’re still in high school, then that would probably mean … Well I guess maybe not with your parents …”

He continues to flail until the girl interrupts him.

I could learn a thing or two from this young bus chick.

The conversation recovers, and they return to the safer territory of class work and mutual friends, until the boy becomes too distracted by his impatience for the bus to arrive. A 4 passes. An 8 (which can look promising to the untrained eye) turns right before it reaches us. An empty artic is headed “To Terminal.” Finally, a fourth bus approaches in the distance.

Check out this photo for context, and have at it.

Chicklet’s still on board books.

Bus Nerd’s approach to waiting is a bit (OK, a lot) different from mine. (I wrote about our differences in a recent Real Change column about riding styles.) He’d rather not waste time waiting at a stop, so he rushes out the door at the last minute — often just as the bus is arriving, occasionally after it has already passed. If you added up my daily 2-5 minutes and his occasional 15, we’d probably come out just about even.

Your turn. Where do you stand on standing (and sitting) at stops?