Transportation investments: Who wins, who loses?

What: One of the many discussions that will be held at Great City’s weekend-long, event, Equitable Growth Dialogues.

Child care and translation will be provided at all of the events on 4/2. If you show up for the earlier discussions, you’ll even get lunch.

From Here to There

What: A community discussion, sponsored by Pacific Science Center (in partnership with the Seattle City Council and Streets for All Seattle) about “transportation challenges and opportunities.”

[This discussion] is part of a series of events that gather community input on different aspects of the City Council’s priority issue of carbon neutrality.”

I’m a panelist at the event, so I’ll be there. In case that’s not enough to send you rushing to the RSVP page, perhaps these incentives will: There will be activities for kids five and older, and (most importantly) there will be food.

This Ignite Portland presentation absolutely made my day. (via: Transit Sleuth)

It’s worth the six minute time investment, but just in case you aren’t up for sitting through another random Internet video (or, like me, you have an ancient laptop with sound\speaker issues), please refer to all 900 of my previous blog posts. This Portland bus chick (April Venable) has managed to summarize them in a single (short!) PowerPoint.

The New York Times recently published an interesting piece about Worcy Crawford, a black man who owned his own bus company in segregated Birmingham, Alabama. (via: Orin) 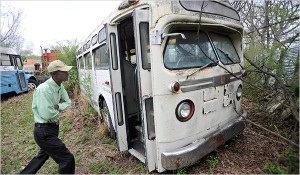 Mr. Crawford’s work was simple. He kept a segregated population moving. Any Birmingham child who needed a ride to school, a football game or a Girl Scout outing during the Jim Crow era and beyond most likely rode one.

So did people heading to dozens of civil rights rallies — including the 1963 March on Washington where Dr. King delivered his “I Have a Dream” speech — during a time when chartering a bus from a white-owned company was impossible and driving past the city limits was dangerous for a busload full of African-Americans.

Worcy Crawfrord died last year, at the age of 90. Fortunately his son, Donald, has written a book about his long-unacknowledged contributions to Alabama’s civil rights and transportation history. The book is not widely available (if you don’t live in Alabama, Amazon is pretty much the only option), but (SPL-checkout or no) I’m definitely going to read it. The Wheels of the Birmingham Civil Rights Movement will make its way to the top of my bus reading queue before the end of 2011.

Today, little Busling reached a bus baby milestone. On our way off the 14, without any prompting, he thanked the driver. (!)

The driver looked confused (“tee-too” doesn’t register to most English-speaking adults as an expression of gratitude), but I couldn’t have been prouder.

Green beer and pinching are all well and good, but that’s just the warm-up to March’s most important holiday. Folks, tomorrow, March 18th, is the day to say thanks to all the hard-working men and women who do what it takes to get you where you’re going. Some manage to do it while adding a little flavor or humor to the ride. Others while (no disrespect to my Bus Nerd) looking ridiculously good. There’s an 8 driver out there who really needs to be in some sort of calendar. And while we’re on the subject: Why is there never a Stranger’s Sexiest category for bus drivers?

Fellow transit types, go forth, and appreciate. But no pinching! 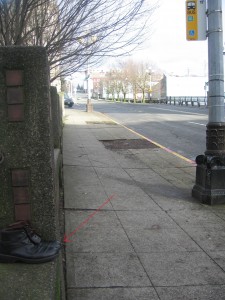 Apparently, someone was using this pair for storage. 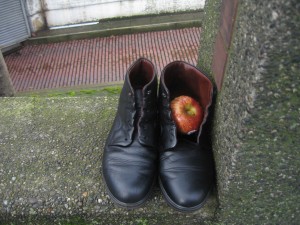 This time last year, I was adjusting to busing with two babes. My first few months with a newborn and a two-year old were challenging, to say the least. But then, my little chip off the big chick stepped up and became a full-time walker, and our travels—Busling in the front pack, Chicklet on foot—got easy again. 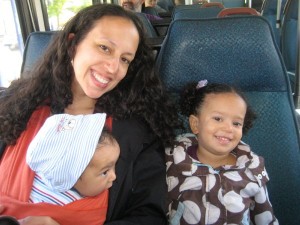 Now, sweet Busling is growing up, and the old system isn’t working. These days, traveling alone* with two is, well, tough. It’s not the actual riding that’s the challenge (not to brag, but I could teach a class on managing children on transit); it’s the logistics. The wrangling, rushing, folding, hand-holding, stowing, storing. The paying while entering or leaving (and sometimes, while entering and leaving**), the finding space, the keeping dry.

What I’m really trying to say is, it’s the stroller.

Baby B has grown too big to be carried comfortably in a front pack (and has also developed a particular fondness for the phrase, “get down”). The carrier we have also works as a baby backpack, but I am incapable of getting him on or off my back without either assistance or a lot of time. Add to that the fact that neither of us is comfortable with the prospect of him being strapped to me for the duration of an outing, and you have a pretty decent argument for bringing along a stroller.

Except that bringing a stroller on a bus is just about the worst form of torture this bus parent can imagine.

For those who don’t know: KC Metro does not allow children in strollers on buses. (I’m embarrassed to admit that I have no idea why this rule exists, but I assume it has something to do with keeping the aisles clear.) What this means is that, if you’re traveling with a child in a stroller, you must remove the child from and completely collapse said stroller before entering the bus. (I’ve seen some parents do the child removing and stroller collapsing on the bus, but I don’t, for a number of reasons.)

1. Put baby in bus-friendly, umbrella-type stroller for the three-block walk*** to the stop. (Alternative: Put baby in front pack for the trip to the stop and carry or drag the folded stroller.)
2. Try to push stroller with one hand while using the other hand to hold on to three-year old. This leaves no hands to hold an umbrella if it is raining, which it almost always is.
3. Attempt to arrive at the stop with enough time for baby-removal/folding (Ever tried arriving anywhere early with two young children?), but not so much time that the three of you get soaked.
4. Remove baby from stroller while keeping a close eye on three-year old near very busy street.
5. When the bus arrives, carry baby, stroller, bag, and three-year old up bus steps—unless, that is, the bus gods bless you with a low-floor vehicle. (Alternatives: a)Allow three year-old to do the climbing herself and hold up the bus. b) Bring baby pack for on/off and add another item to keep track of and another step to the process.)
6. Pay (convenient bag tap—actually easy—yay Orca!).
7. Find space for everyone and an out-of-the-way place to stow the stroller.
8. Spend a few (sometimes many) minutes of quality time with the kids–usually reading books or discussing the goings-on outside the window.
9. Start preparing to repeat the process in reverse. 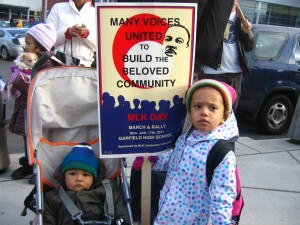 Because I so despise bringing a stroller on the bus, I spend a lot of time calculating whether it is worth it to me. I generally weigh the hassle of bringing it (if we have to transfer, how crowded the buses are likely to be) against my need for it at the other end. If we’re visiting someone’s home, I’m unlikely to need it. If we’re hitting several different downtown stores, I’m very likely to need it. (If I decide not to bring the stroller, I carry Busling in the front pack and endure the less-than-idealness.) Sometimes (actually often) both the hassle factor and the need factor are high. Add to this the many mitigating factors (rush hour? nap time?) and the fact that our backup travel options are also made more complex (or impossible) with two kids, and it adds up to way too much mental (and physical) energy invested in simply getting around. (I knew we should’ve moved near a Link station!)

Of course I know this challenge will pass. It will get better temporarily when the weather improves (Hello, August? It’s me, Bus Chick. I miss you!), and it will disappear entirely (to be replaced, I am sure, with new and different challenges) once Busling is old enough to walk several blocks on his own. Not that I’m rushing things. The years are flying by as it is. And, stroller hassles or not, I created some amazing baby-busing memories during this one.
***

* I should say, before you all start to think I’ve gone sour on the bus, that busing with two adults and two children is still a lot of fun—far more fun than I imagine driving with two adults and two children would be. And these days, busing alone with one child feels like a vacation.
**If you ride a route that originates outside of downtown but travels through it, you have to pay twice because of pay as you enter/pay as you leave drama. (If you’re not from Seattle: Don’t ask.) Of course, you don’t actually get charged twice—since you already have either a transfer or a pass—but it’s still a hassle.
***Distances vary, depending on which route we’re catching.

For me, it’s not a game-changer, but the reason is not the app; it’s the transit-friendly locations of my apartment and office. I’m lucky; I live in a neighborhood with a good bus system. My front door is within five minutes of three bus routes that take me straight to the office; all of them come pretty frequently at peak commute hours.

I’m never tempted to drive, since the bus ride takes about the same amount of time and let’s me catch up on reading. Plus, compared to the hundreds a month I’d spend on gas and parking, the bus is a steal. It’s the perqs of living in a walkable neighborhood close to the urban core and crisscrossed with transit lines that make my commute a breeze.

I absolutely agree that transit access (and especially frequent service) is far more important than any tool, but I also think the picture is bigger than how fast a person can get to work. Hess acknowledges that OneBusAway and similar tools would likely be more useful for someone who depended on one bus with infrequent service. Let me add that they are also extremely useful for people who use the bus for purposes other than commuting.

I don’t use phone tools nearly as much I could–both because my phone’s not the greatest and because I often find looking up the information to be as tedious as waiting–but on days when I’m clothes shopping with two kids and need to know when to put on hats and coats and head out into the cold and rain, or when I’m at a party on a (low-service) weekend night and would prefer chatting with friends to a lonely wait at a deserted stop, they make all the difference.