All the dry, sunny weather we’ve been having of late has me feeling somewhat complacent, as if the rains will never come. I’ve put off buying a new pair of boots, which (after countless seasons of re-heeling and polishing the same favorite pair) has become a necessity. I also haven’t replaced my lost umbrella, unearthed my favorite pair of gloves, or procured enough cool-weather clothes for the kids. But, I am ready with the rain gear*, people. 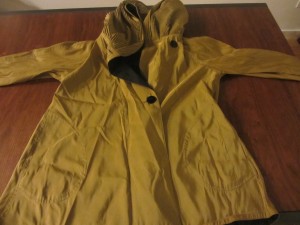 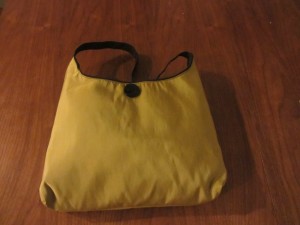 Given how efficiently packed my bag is, this little number is (or will be) a significant addition. It takes up more space than almost anything else I have in there. But the fact that there exists in the world a professional, versatile, poncho-like garment that will fit over any outfit** and pack up to the size of a medium book without getting anything else in my bag wet is pretty doggone amazing–definitely worth the extra bulk and ounces.

And speaking of amazing…

My friend Lily told me about this ingenious little bag many years ago, and I finally got around to purchasing one (actually, two) in June. 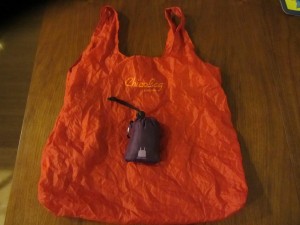 My handy new shopping bags: one open, one ready to pack

It handles (almost) all of my plastic bag scenarios (I still carry a couple of those as well) and comes in handy for my frequent “on the way” shopping trips–especially now that Seattle’s bag ban is in full effect. Also, it’s tiny (Bus Nerd carries one in his pocket), washable, and adorable.

*For the past few years, I have owned no outerwear appropriate for rain. It’s a long story I won’t take the time to tell here. Y’all know how I tend to digress.
**Too bad I didn’t know about this back when I still wore a baby pack.

A lot has happened since my last post. (This is mostly because I wrote it over six weeks ago, but it was a pretty jam-packed end of summer.) For one thing, my baby brother got hitched. (!) And also, we made a trip to the Puyallup Fair.

The last time we did the Puyallup (way back in ’08), Pierce Transit offered a shuttle from Tacoma Dome station right to the fairgrounds. The trip was reasonably painless but did involve two transfers and a bit of a roundabout route. These days—in case you haven’t heard—Pierce Transit is broke. The agency has been forced to cut a lot of vital service, so obviously, the fair shuttle had to go.

So, when we talked about going to the fair again this year, I assumed it was going to be a hassle to get there. I’m no stranger to transit adventures, but I do have my limits, and a day at the fair with two children is exhausting enough without bookending it with a couple of bus marathons.

As it turns out, the fairgrounds is only a little more than half a mile from Puyallup Station. (Thanks for the tip, Priya!) To get there, we caught the 578* from 2nd & Pike and then walked the .6 miles (through a pleasant downtown area, on sidewalks) from the station to the fairgrounds. The 578 isn’t a straight shot (it stops in Federal Way, Sumner, and Auburn), but it mostly sticks to transit centers and the freeway and keeps the stopping and starting to a minimum. Our total travel time was roughly two hours, including walks and waits. The cost: $2 of extra charges on our Orca cards for the 578 ride.

The ride back was even better (and significantly shorter), since the Sounder was running. We walked the same .6 miles back to Puyallup Station and caught the 4:37 PM train (the first northbound train after the morning rush) back downtown. Have I mentioned that I love the Sounder? It delights me. Our total trip time—from the fair exit to our front door—was an hour and a half, and the train ride was easily as fun as anything we did at the fair. And speaking of…

All four of us had a fantastic time. We ate ice cream. We met firefighters. We watched a pirate show. We ran into many friends. We got (henna) tattoos.

And, yes, we even did some driving. 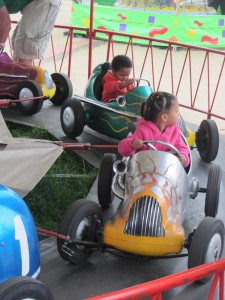 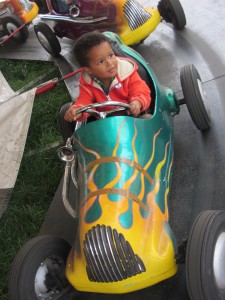 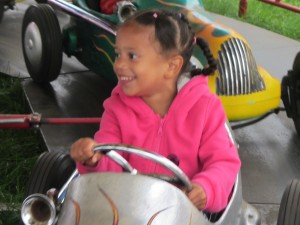 Already looking forward to next year…