Today after church, at a southbound 48 stop, I spotted one of my bus parenting heroes, a man I’ve never actually met. Back in ’08, when Chicklet was but a wee lass, I saw him playing Connect Four with his kid at a northbound 48 stop (in the shelter that advocates for what Bus Nerd refers to as “the right to safe trife“). Having already begun my bus reading adventures with young Chicklet, I was inspired by the concept of bonding in transit–and by the way the two of them interacted. Also, I love Connect Four.

Today, Bus Dad Extraordinaire had two children with him (the boy he’d been playing with that day, and a little girl, who was probably around two). By the time I realized who he was (and started elbowing Bus Nerd like I’d just spotted a celebrity), I heard the boy say something about Crazy Eights. There was no doubting BDE’s identity after that.

On the ride, the three of them sat near enough to the four of us for me to keep my eyes (and ears) on them. And you know I did. By the time we were getting off, the boy was shuffling.

BDE then, plus one: 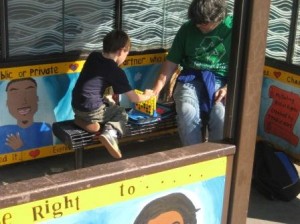 Update, 10/11: Kathi from Ballard just emailed to tell me that she knows BDE. Even crazier? So do I! Her description of him made me realize that I have met him–at a transportation event, of course. (Yes, I realize it is beyond odd that I remembered seeing him at a bus stop three years ago but not meeting him in person much more recently. I blame it the short-term memory loss related to sleep deprivation.) Back when we met, he mentioned that he lived not far from me, and later, we emailed about getting our families together for dinner. It didn’t happen, but now, of course, I have to follow up.

How much do I love my bus community?