Some months ago, I turned 44.* One of the many blessings of being over 40 is a deeper understanding that right now – this year, this day, this moment – is your life. There is no ‘maybe someday’; there is only now.

One thing that’s been on my “someday” list for a long time is to try riding a bike to get around. In the 13 years I have lived without a car, I have taken fewer (probably far fewer) than 13 bike trips. This is mostly because I am terrified to ride in traffic.** But, it is at least partly because I don’t have a bike. Or at least, I didn’t.

The grown-ups in our family rarely request or receive non-edible birthday gifts, but this year, I requested. And folks, I did receive. Behold, my bicycle: 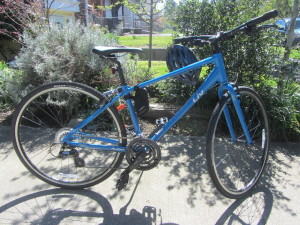 I call her the 6*** (thanks, Justin!), since there is no King County Metro route 6. That way, I can say stuff like, “I’m taking the 6 there,” and confuse everyone with my clever bus chick tricks.

The good news is, I’ve had a ridiculous amount of fun on the two recreational 6 rides I have taken with my family: one along the path at a neighborhood park (in the pouring rain — still fun!), and one several times around our block after dinner. The bad news is, those are the only rides I’ve taken in the over two months I’ve owned a bicycle.

I have many reasons for resistance, even in addition to my aforementioned fear: weather, locking ineptitude, helmets, hills, etc., etc. But, I rarely even get to those. The main issue is, when I have to go somewhere, it simply does not occur to me to take my bike. My deeply ingrained habit is to walk out the door and head to a bus stop – or just keep walking. Most of the time, I forget that the bike is even there.

My car-free life generally (ahem) works pretty well for me as it is. A lot of my regular destinations are within walking distance, and most of the rest is bus-able. But there’s a category of travel — when it’s too far to walk in a reasonable amount of time, and there isn’t a decent bus option — that I want to use a bike for. There are plenty of trips in this category that I simply don’t take, because I’m not going to transfer and wait and deal with infrequent schedules just to travel a couple of miles. I want to expand the number of trips I say yes to, to experience the kind of freedom and access and point-to-point, on demand travel that a bicycle provides. And I want to do it while my body still works well enough to allow for the option.

So, I have promised myself that 2016 is now for me and Miss 6. At least once a week, from today until the end of September, I will use my bike to get somewhere I need to go. I will figure out how to lock it correctly. I’ll deal with the helmet. I’ll even attempt a few hills.

Maybe I will develop a habit. Maybe I’ll decide to stick to park paths with my kids. Either way, I’m going for a ride.

* Yes, I realize that I’ve pushed far beyond the years that one can reasonably call herself a “chick.” Unfortunately, there’s already a bus lady, but I’m seriously considering a change to “bus hag.”
** No, I am not trying to perpetuate the idea that bikes are dangerous. Quite the contrary. I am very clear that cars are the vehicles that are dangerous. Because of this, I believe that there should be safe places to ride them – places that do not include cars or vulnerable pedestrians.
** Chicklet has proposed a different name, “Orca Sparkle,” which her brother fully supports. Fortunately, the bike is flexible and will answer to either name.