On Saturday, Bus Nerd and I went to see The Black Panthers: Vanguard of the Revolution at Northwest Film Forum. I learned many things from this film, one of which is that founding chair Bobby Seale was the best political candidate of all time.

During his 1973 campaign for mayor of Oakland, the man took his message directly to the people, Panther style. 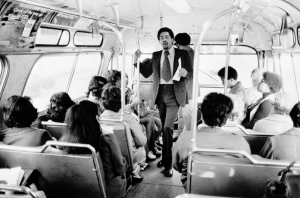 Though he wasn’t able to unseat Oakland’s incumbent mayor, Seale’s “long shot” candidacy, masterminded — along with the city council candidacy of Elaine Brown — by the ever resourceful Panther organization, earned him a second place finish in a nine-candidate contest. More importantly, it earned him a voice in the debate.

I have always been inspired by the dedication and sacrifice of the Black Panthers. The young people — average age of a member was between 18 and 20 — who joined the organization gave their whole selves to the cause. They risked personal safety. They sacrificed relationships. They shared resources, including living quarters. And they worked. Tirelessly. Sometimes around the clock.

The fruits of that tireless, dedicated labor were many: chapters in 38 cities (including Seattle), a newspaper with an international circulation of 250,000, a free breakfast program that fed 10,000 children per day at its peak, and free health clinics in cities across the country.

These young people were not willing to sit idle and hope hard for change. They stood up, took action, made mistakes, tried again. From their small corner of this country, they raised their voices loud enough for the whole world to hear. 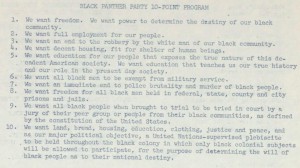