The latest installment of Grist’s dating column, “Treeshagger” (I know, I know) is all about how to find your soul mate (or at least someone you wouldn’t mind sharing a coffee or two with) on public transportation.

No matter how many “met on the bus” stories I hear, I never get tired of the topic. And this particular column happened to include the best transit hookup story I’ve ever heard. Peep it:

Did you hear about Patrick Moberg, that dude who found the girl of his dreams on the New York subway? Like a twee Wes Anderson hipster-man, he drew a picture of her in full rosy-cheeked glory, set up a website (NYGirlOfMyDreams.com), and struck gold when a friend of hers saw it and put him in touch with her.

I imagine their first date was a bit awkward, given that she already knew she was the girl of his dreams and all, but still. Wish I’d known about this dude on Valentines Day.

On the flip side: Not everyone you meet on PT is a potential love interest (ahem). Jezebel’s Social Minefield column recently tackled the ever controversial topic of transit etiquette. In case you don’t have time to read it, I have taken the liberty of summarzing: Be aware of others, and be courteous.

“Mom, can we get the kind of car that we keep at our house?”

My latest for Grist is all about why I love mine. 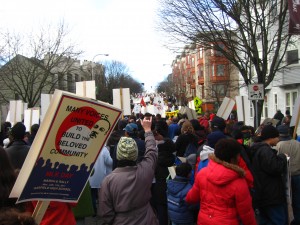 My latest for Grist: “Driving a car doesn’t mean being in control”:

It’s during the times we are not able to drive that it becomes clear just how little “control” a car-dependent life provides. Driving a mile or more to buy a gallon of milk or a box of Band-Aids may not seem especially remarkable until your alternator dies. Or gas prices rise above $4 per gallon. Or the roads are covered in a foot of snow.

In my latest Grist column, I present a different take on “green” parenting. 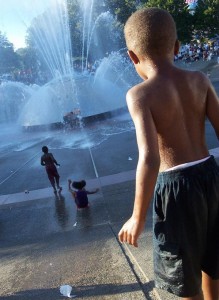 Most environmentally aware parents would say that we’d like to keep the planet in good shape for our kids. We’d like them to have clean air to breathe, healthy sources of food and water, and the good fortune to coexist with a variety of species of plants and animals. We’d also probably prefer that they not be drowned by rising sea levels before they reach retirement. This is somewhat (OK, a lot) ironic, since many of the environmental ills that threaten our children’s futures have been exacerbated by our attempts to keep them safe in the here and now.

Sweet Chicklet turns three today. In honor: my first Grist column is all about busing with babies–er, I mean big kids.

Since our daughter, Rosa was born, three years ago today, we’ve been Metro parents. Rosa took her first bus trip home from the hospital at one day old and has ridden almost daily ever since. What I’ve learned is that there are significant challenges to parenting without a car. This is not because there’s anything inherently unhealthy or inconvenient about taking kids on public transit, but because most U.S. cities, including mine, were built (or rebuilt) to accommodate cars. I’ve also learned that opting to continue our bus-based life was an excellent choice for our children’s health and well-being. Here’s why. Read the rest…

Thanks mostly to high gas prices, public transportation ridership has been growing steadily of late–in Seattle and across the country…even in L.A.. But, according to this Ryan Avent piece in Grist, that hasn’t changed our approach to transportation.

Americans, it seems, are not constitutionally opposed to mass transit. An American public enthralled by automobiles has seen the enemy and begun to look for solutions — to congestion and fuel prices, and to climate change. But those looking have discovered that a half-century of neglect has made travel by transit a challenge.

Seeking options, the nation has found them wanting. The ceaseless climb of oil prices, the growing financial toll of congestion, and the looming cataclysm of global climate change have not yet shaken the men and women entrusted with the care of our infrastructure to act — or moved politicians, the press, and the public to demand action. Why can we not bring ourselves to speak of the need for better transit?

That’s what I’d like to know. In all the hype over the presidential election (yes, I’ve been caught up, too)–with all the talk about global warming and gas taxes and green jobs and “clean” coal, I have yet to hear a candidate mention public transportation as part of the solution. Here in Washington, we’re still charging car-sharing members a tourist tax (in case you didn’t know, HB 2880 failed), and a major gubernatorial candidate still believes that the answer to climate change is to expand our freeways. Avent has some thoughts about why.

So why are greens and political leaders reluctant to embrace transit as an energy and climate fix? Perception may be a problem. Transit systems are widely seen as dirty, slow, unreliable, and inconvenient relative to automobiles. Romm suggested to me that transit is seen as “not sexy.” When folks imagine a greener future, visions of electric cars and solar panels abound. No one thinks of a humble subway car rumbling through dark, century-old tracks beneath Manhattan.

Maybe I’m the only one, but I see cars as dirty, slow (Been near 520 lately?), and unreliable. And though I’d love to see cleaner energy solutions in the very near future, I’d like to see an equal focus on figuring out the best ways to move more than one person at a time. Because here’s the thing: Even the cleanest, most efficient car can’t relieve congestion–or control sprawl–or encourage walking–or promote community. A good transit system can.

I’m not sure what ridership numbers we’ll have to reach before transit moves to the forefront of our collective consciousness. But, with the help of $4+ per gallon gas, here’s hoping we get there soon.

Tomorrow, Saturday, April 14th, folks across this fair land will participate in Step it Up, 2007, “a day of community events across the U.S. where citizens will demand political action on climate change.”

Who: You, and everyone you know
What: Rallies, parties, parades, sit-ins, hikes, climbs, dives, and much more
When: Saturday, April 14, 2007
Where: More than 1,000 spots around the U.S.
Why: Because it’s getting hot in here

Here in Seattle, the main event is an all-city march that starts at 2:00 PM at Occidental Park, a very bus-chick-friendly (read: bus accessible) location. The mayor, County Kingpin, et al will be there.

Marching not your thing? Here’s a list of all the events in the area.