One of the things I’ve come to accept about myself is that I have very few actual skills. I don’t know how to make stuff or fix stuff. (Shoot, I can barely troubleshoot a clogged toilet or hang a picture straight.) I can’t sing or draw or play an instrument. I can’t run or jump or catch. I fancy myself an “activist” but have essentially zero talent for leading people, or organizing, or motivating.

Friends, here is an exhaustive* list of the things I’m good at.

Whether or not I feel good about my writing abilities depends on whether I’ve been able to produce anything I don’t hate (or, for that matter, anything at all) in the recent past. My baby-whispering skills do not extend to children over the age of three.

But my bus skills? They are legendary.

You cannot mess with me on my transit know-how. There are some people who could definitely crush me in the route knowledge category and others who win in the longevity department. But on the ground, I am the queen.

Back in March, I took Chicklet to a birthday part for one of her classmates. (Have I mentioned how ridiculously easy it is riding the bus with one seven-year old? Seriously. Compared to what I’ve got going on these days, it’s like a freaking vacation.)

The party was at Seattle Children’s Museum, so we took the 8. It was on that 8 that we ran into the birthday boy and his mom, LaShaun. I knew as soon as I met LaShaun that she was a bus chick—and not just because she was on the bus. (One does not earn the title of bus chick by bus riding alone.) LaShaun was riding the bus to her kid’s birthday party.

Nope. LaShaun had a small hand truck stacked with plastic crates that contained all of the necessary party supplies. She sat in the front area with her son curled up next to her and the cart pulled against his seat to keep it out of the way of the aisle. During the ride, we chatted about all of her preparations for this train-themed (!) party, including the table centerpiece she constructed with old tissue boxes and toilet paper rolls. (To a woman, bus chicks are resourceful, though not all are crafty enough to create table centerpieces that look like trains. Ahem.)

When we reached our stop, LaShaun hauled the entire party off the bus (while holding her son’s hand), and started rolling it across the Seattle Center campus to our destination. A few steps in (and 15 minutes before the party was supposed to start), the supporting crate cracked, and her carefully balanced tower of supplies started to come apart. We tried putting everything back together, but the tower wouldn’t hold or stay on the hand truck. The crates were too heavy and cumbersome to carry for the significant walk to the museum.

“If we had some duct tape, you could probably just fix it,” I said, mostly just to say something. Who has duct tape?

You know what? LaShaun had duct tape. In her backpack, naturally. In less than a minute, she hoisted the crates back onto the cart and taped everything, (MacGyver-style) until it was haul-able. I grabbed the cake, the kids grabbed a few small items, and the four of us marched that stuff to its destination with time to spare.

Now let me tell you what was in those crates: snacks, drinks, party favors, the centerpiece (which was perfect), train-themed decorations, and several gifts. I took a picture of the lovely cake, which wasn’t as amazing as another transit-themed cake I told you about a few years back but certainly worked for Chicklet and me. 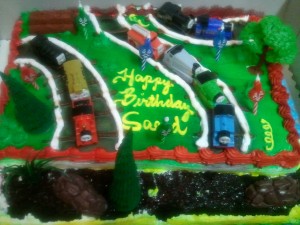 If I hadn’t been so sidetracked by the newborn one of the parents brought to the party (see above), I would have taken more.

* According to my husband, I also make a mean sweet potato pie, if that counts.

2 thoughts on “On busing and birthday parties (or, My brief encounter with a bus goddess)”