Last Thursday, I met with a woman named Rachel about a bus-themed event she is planning. Not surprisingly, Rachel and I bonded over our love for buses. We talked about the connections that happen on transit, how they influence us, instruct us, and ground us in our communities. Rachel called these interactions “small moments,” which — leaving aside the association with elementary school writing curriculum* — is exactly the right way to describe them.

Most of my meaningful bus encounters aren’t stories with a beginning, middle, and end. They don’t result in epiphanies or lasting friendships but instead in a slight opening of my heart, a brief glimpse into another life, a kindness shared or received, a small surprise.

There was the time last Friday, when the kids and I were waiting at the Madrona Park 2 stop while the bus was laying over, and the driver, who could surely have used a few moments to himself to eat, use the phone, or just be blessedly alone, opened the bus doors and invited us inside 10 minutes before he was scheduled to leave. Because it was cold.

There were the four teenagers in the back of a Friday evening 106, talking smack and cursing up a storm, then — remembering my kids —  turning to me and saying, “Oops! Excuse our language.”

There was the time in mid-November, at the height of my post-election rage and panic, when I spotted this graffiti message in front of my seat on the 3. 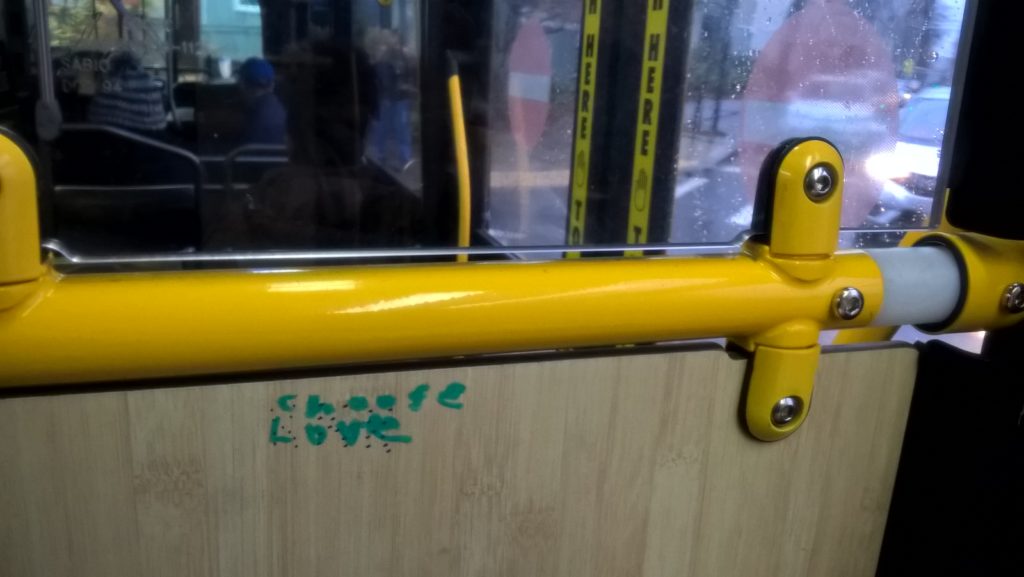 There were the Thanksgiving rides to and from my brother’s house (three buses each way), populated with passengers (including us) carrying dishes to share and foil-covered plates of leftovers.

There was the time Chicklet and I boarded the 48 on the way to church, and the driver announced to everyone within earshot, “Look — twins!”

There was woman next to me on the 27 having a desperate phone conversation with DSHS, trying to figure out who to talk to and how to get credit for the services she was receiving, so that she could be reunited with her children.

There was the time we played musical chairs on a crowded 4 — an elderly man getting up for a woman with a walker, and then another person offering a seat to that man, and so on, until six people had made room for someone who needed a seat more than they did.

There was the man at the 14 stop showing his birth certificate to random strangers to prove he was born in 98122 – a zip code where he can no longer afford to live.

There was the Saturday when Bus Nerd and I took Busling on separate 8 rides and later figured out we’d had the same driver, because we each returned with a snack bag of chips he’d given to Busling upon boarding.

There was the woman on the 120 who reminded me of a younger version of myself: brownish, with a bus bag, reading a big book. After I snuck a peek at the title, we spent the next few minutes bonding — over books in general and Zadie Smith in particular — until we reached her stop.

There was the time we took my three-year old nephew to the Children’s Museum, and Chicklet left one of her beloved Harry Potter books on the 8. Thanks (obviously) to wizard magic, we rode the same bus on the way home, and Chicklet found her book right where she’d left it.

There was the Link ride back in June, where I saw a woman in a hijab with a Pride t-shirt and a man with a sign that said “LGBTQ solidarity with Muslims.”

There was the time I waited at Mount Baker Transit Center with two senior adults and their 12 preschool-aged charges, who chattered cheerfully — wearing matching backpacks and grins — as they waited for the 8 in a perfectly straight line.

There was the time my kids successfully chased down a 50 for the second morning in a row, and the driver told them they would grow up to be track stars.

There are so many more, every day — every ride. Most are quickly forgotten. They are part of the background of my life, perhaps in the same way as a driver’s daily maneuvers. But unlike drivers, I am reminded every time I travel of the humanity that surrounds me.

And it is beautiful.

* Chicklet and Busling have both written their fair share of “small moments” stories in their school careers. So far, none have been about the bus. ; )