One of my favorite things about public transportation is the culture that develops among riders. There are things we just do, regardless of our life stage or social standing, that identify us as bus (or train) people. If you’ve never hollered for the driver to open the back door, panic rising in your voice; woken from a nap just in time for your stop; or engaged in at least one book discussion or sports debate with a stranger, you haven’t been riding long enough.

And if you’ve never hurried to catch a vehicle, only to have it close its doors (or pull away) just as you arrive, well, then you can’t call yourself a transit rider.

Watching this Gothamist video feels like looking in the mirror.

If anything could cheer me right now, it is this goodness from the Twin Cities. (Thanks for sharing, Allison!)

New posters will be installed on dozens of metro buses once a month from June through November 2015, culminating in a community event.

Viewers are encouraged to discuss the questions with other riders and to post responses on this site or on social media with the hashtag #CuriousCityTC.

Yes to art on buses! Yes to projects that encourage interaction and reflection. Yes to building community. 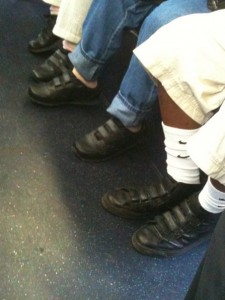 Back in the day, NYC subway ads were used to select beauty queens. Seriously.

The Miss Subways pageant was a monthly contest run by the New York Subways Advertising Agency between 1941 and 1976. To compete for this coveted title, entrants had to be female, between the ages of 14 (!) and 30, New York City residents, and–most importantly–subway riders. Though the finalists were selected by a modeling agency, the winners were chosen by the contestants’ fellow riders–through a call-in voting system. The photo and bio of each month’s winner were displayed in the ad space of every car on three major lines.

Feminist issues aside, the fact that these beautiful, instant celebrities–recognized by more New Yorkers than the most successful of Broadway actresses– were of, by, and for the community of everyday riders* made the subway seem glamorous and full of potential. (The first Miss Subways was Mona Freeman, who went on star in several popular teen films. ) The ads for the contest encouraged riders to think this way: Look around this car! Next month’s selection may be riding with you! [Indeed.]

The contest was discontinued in 1977 and briefly revived in 2004. Caroline Sanchez-Bernat was crowned Ms. Subways to help commemorate the New York Subway’s 100th anniversary. In the modern version of the contest, the application included short essay questions. Here’s part of Ms. Sanchez-Bernat’s response to, “What does the subway mean to you?”

…I can rely on it to get me safely to work in the morning and home at night. It’s also my favorite place to people watch.… The more I ride the subway the more I learn about what it is to be a New Yorker…

I couldn’t have said it better.

*The subway being one of the most democratic forms of transportation–and subway riders being a diverse and fair-minded lot, barriers that existed in mainstream pageants were more easily transgressed in this one. The first black Miss Subways won the title in 1946, 35 years before the first black Miss America. In 1949, the first Asian woman became Miss Subways, and several other women of color won the title over the years.

If you’re going to be anywhere near SoCal between now and December 11th, go see LA artist Diane Meyer’s provocative new photography exhibit, Without a Car in the World (100 Car-less Angelinos Tell Stories of Living in Los Angeles).

Without a Car pairs photo portraits of 100 L.A.-area residents (including me!) with brief quotes from their interviews about car-free living. Far from a simple hurrah for automobile-free living, the exhibit features interviews both from those who are proud of their car-free lifestyles to others who sound deeply unhappy about a car-less-ness that’s been imposed on them, whether due to financial concerns, disability, or other reasons.

In fact, the juxtapositions of these points of view are what makes Without a Car especially poignant. One Angeleno talks about how taking public transportation’s so much easier and convenient than people think it is. Another expounds on the difficulties of getting around by bus — how long it takes, how unreliable the system seems.

What the exhibit makes clear is that going car-free’s an extremely individual experience — and that race and class play heavily into how pleasant that experience is going to be.

This looks (and sounds) absolutely amazing. If you’re able check this out, hit me up (or comment), and let me know what you think.

Today marks the 10th anniversary of one of my all-time favorite movies, Spike Lee’s Get on the Bus.

For those who haven’t seen the film: It’s about a group of black men who travel (by bus, of course) from Los Angeles to Washington, DC to attend the Million Man March. (Today is also the 11th anniversary of the march.)

It’s no coincidence that Lee chose a bus (the most democratic of vehicles) as his characters’ mode of travel. The men come from varied backgrounds, circumstances, and stages of life but share in common a desire to attend the march, and, consequently, their time on the bus. Over the course of the three-day ride, they discuss their beliefs, prejudices, hopes, fears, and histories. They discuss the problems facing the black community and their differing views about how to fix them. They develop friendships and rivalries.

No one mentions public transit. :)

To commemorate the film’s anniversary, I watched it again and found it just as moving and (sadly) relevant as I did the first time. It was definitely worth the bus trip (speaking of getting on the bus) to Scarecrow, including the return trip on the Husky Downer Express.

A side note: In real life, Rosa Parks (also known as my all-time favorite bus chick) was one of the speakers at the Million Man March.