But King County Metro was the sore spot of my car-free life. Agency rules required me to fold Orion’s stroller. Holding all of the stroller’s contents and Orion, I then had to find a seat before the bus lurched forward. The challenge didn’t end once on board. I had to squish into a seat with all of our stuff and attempt to keep Orion from grabbing the stroller’s dirty wheels for the duration of the ride. Once we arrived at our stop, I had to reverse the whole ordeal. 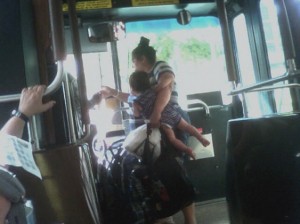 As someone who would rather strap on an almost-30-pound, squirmy toddler or walk miles in bad weather than bring a stroller (plus two children) on the bus, I can relate. And don’t get me started on transfers.

Regardless of the reasons for Metro’s policy, which are not entirely clear (and, as far as I can tell, not explicity stated on the agency’s website or any of its printed materials), there isn’t much doubt that it makes busing extremely inconvenient and stressful (if not downright impossible) for parents, many of whom do not have other transportation options. And the thing is, (as Nelson discusses in her post) there are alternatives.

Back in ’06, Oakland-based Transform was instrumental in changing the stroller policy on Tri Delta Transit (in Contra Costa County).

ANTIOCH, CA, March 31, 2006 – The Eastern Contra Costa Transit Authority (Tri Delta Transit) recently became the first transit agency in America to create a designated stroller area on buses. In March, 2006, Tri Delta Transit took the precedent-setting, proactive step of removing one set of seats on each of its 40-foot fixed route buses, designating the remaining space for passengers with strollers. To date, 90% of Tri Delta Transit’s available fleet has been retrofitted with the new stroller area and the remaining 10% should be completed by mid-April, 2006.

You can read the rest of the press release (which includes the details of the policy) here.

Call me cynical, but I don’t see Metro’s stroller policy changing anytime soon. (The way things are looking, I’ll be happy if the routes I ride regularly are still around in a year.) It would be nice, however, if the current policy was at least clearly posted and consistently enforced.

And would it be too much to ask for a moment to find a seat (or at least a pole to grab) before the bus takes off?

For me, it’s not a game-changer, but the reason is not the app; it’s the transit-friendly locations of my apartment and office. I’m lucky; I live in a neighborhood with a good bus system. My front door is within five minutes of three bus routes that take me straight to the office; all of them come pretty frequently at peak commute hours.

I’m never tempted to drive, since the bus ride takes about the same amount of time and let’s me catch up on reading. Plus, compared to the hundreds a month I’d spend on gas and parking, the bus is a steal. It’s the perqs of living in a walkable neighborhood close to the urban core and crisscrossed with transit lines that make my commute a breeze.

I absolutely agree that transit access (and especially frequent service) is far more important than any tool, but I also think the picture is bigger than how fast a person can get to work. Hess acknowledges that OneBusAway and similar tools would likely be more useful for someone who depended on one bus with infrequent service. Let me add that they are also extremely useful for people who use the bus for purposes other than commuting.

I don’t use phone tools nearly as much I could–both because my phone’s not the greatest and because I often find looking up the information to be as tedious as waiting–but on days when I’m clothes shopping with two kids and need to know when to put on hats and coats and head out into the cold and rain, or when I’m at a party on a (low-service) weekend night and would prefer chatting with friends to a lonely wait at a deserted stop, they make all the difference.

The Sightline Institute is still plugging away on its informative Sustainababy series. (OK, so I’m not in love with the name, either, but they’re sure covering issues worth reading about.) Installment 25 is by Jennifer Langston, a Sightline employee and mom who tried transit with her toddler for the first time this summer.

Like many parents, Jennifer had been avoiding PT, in part because of the perceived danger of taking her daughter on a vehicle that doesn’t have child safety seats. But then she and her daughter had a great time riding the Seattle Streetcar for a preschool field trip.

“Bus” was one of her first words. [ahem] She startles strangers on the street by yelling it at the top of her lungs whenever she sees one. Yet she hasn’t actually ridden on one yet. And as I saw how fascinated she was by the streetcar–looking at its reflection in buildings, watching the floor joints move, trying to lick the windows, I found myself asking why I hadn’t done this before.

So, she decided to look into it. Here’s what she found:

A study published in the American Journal of Epidemiology in 2007 found that, statistically, you’re far more likely to be injured or killed riding in a car than a bus. In fact, riding a bus is safer than walking, bicycling, driving a car, or hopping on a motorcycle. Whether the reason is that sheer size of a bus distributes the crash forces differently or that they travel more slowly, the raw numbers are pretty compelling.*

Thanks for the informative post, Jennifer, and for trusting transit with your precious cargo. See you guys on the bus!

*I assume they don’t have stats for trains because they aren’t really part of “traffic,” but I’d still like to know what they are.

**The walking and cycling stats aren’t especially encouraging. As the study points out, “…most bus occupants are also pedestrians during some portion of their journeys (e.g., during the trip to and from the bus stop)…Measures to promote pedestrian safety should also consider the routes that provide access to public transportation.”

***So, if 40,000 people die in cars every year, and there are nine deaths per 100 million person trips, that means we’re taking a lot of car trips.

Watch these 15 short films, and you’ll be feeling festive, too.

My favorite’s still the one about scraper bikes, thanks to my penchant for macked out vehicles. What’s yours?

Update: Sightline’s got an Earth Day video (well, a video slideshow) too. It’s worth watching just for the spectacular scenery (so many reasons to ride!)–oh, and the buses and trains.

The Sightline Institute has a new parenting series on its Daily Score blog. Rather than simply discussing personal parenting choices, the series, Sustainababy: Growing up Green, examines parenthood “through the lens of sustainability policy.” Not to discount the power of personal choices (“Be the change you want to see” is, after all, my personal motto), but I’m really glad to see this. Certainly, policy has a huge impact on children’s health–arguably much greater than the individual decisions parents make.

The first entry, “Breathing for Two,” discusses air quality and its effects on unborn babies.

Early in my pregnancy I developed a bloodhound’s sense of smell: even the faintest of odors overwhelmed me. It’s a common phenomenon during the first trimester of pregnancy, yet my new nasal superpower took me by surprise–and forced me into an unwelcome awareness of the pollution that surrounds all of us. Car and truck exhaust, to my unusually acute nose, was pure poison. It made me recoil, hold my breath, gag, choke. My new super-nose could detect the smell all over the place–waiting at the bus stop in my quiet Seattle neighborhood, wafting through 5th floor downtown office windows, even at the park and in my own backyard. I realized, perhaps for the first time, that the air I breathe really stinks.

It’s definitely worth it to read the entire post–and the others in the series. The folks at Sightline want feedback and ideas from parents (and interested nonparents) around the region, so check it out–and chime in.

The Daily Score recently posted an excellent analysis of the Puget Sound Regional Council’s study on tolling. The study investigates the effectiveness of tolls at reducing congestion but also tackles the issue of tolling fairness head on. From the DS post:

But the benefits of tolling aren’t spread around evenly. Instead, congestion pricing would create “winners” and “losers.” The biggest “winners” would be drivers whose time is worth a lot of money: commercial truckers most of all, but also wealthy private citizens. (If you make $100 per hour, spending $5 to save 15 minutes is a bargain!) Transit riders would also win, since they’ll face shorter travel times at no personal cost.

The “losers” would include people priced off the roadway–folks who’d prefer to drive, but can’t afford to–as well as those who would keep on driving, but pay more in tolls than they receive in time benefits. Perhaps worst-off would be the folks who succumbed to the “drive ’til you qualify” phenomenon: families who moved to a distant suburb where housing seemed more affordable, but where transit simply isn’t an option and car-dependence is the norm.

But as the PSRC report points out, road tolling creates a stream of revenue that can be used to address these fairness questions head on.

The author goes on to point out that our current system (of providing free road space) is also unfair.