In late June, after SPS finally released its hostages for the summer, our family made its annual pilgrimage to Bus Nerd’s hometown of Detroit. In the past, our visits have mostly been confined to Detroit proper and its nearby suburbs, but this year, at my insistence, we ventured out a bit.

I had been dying to visit Mackinac Island, a small island in Lake Huron between Michigan’s mainland and its Upper Peninsula, ever since I learned of its existence a few years ago. Because of its beautiful setting, old-fashioned vibe (think quaint Victorian village), and preponderance of fudge shops, Mackinac draws a lot of tourists — almost a million every year. Under ordinary circumstances, I would not be eager to visit a crowded island that bills itself as an homage to a “bygone era”* and boasts a giant military fort (complete with regularly firing cannons) as one of its main attractions. But in this case, the circumstances were not at all ordinary: Mackinac Island does not allow cars. (!!!)

When “horseless carriages” came on the scene in the late 19th century, Mackinac was already a popular tourist destination. Residents did not appreciate the presence of motorized vehicles on their lovely island; they were noisy and dangerous, scared the horses, and generally disturbed the peace. So, in 1898, the municipality formally banned automobiles. The ban remains in effect today.

The idea of experiencing life without cars, even in a somewhat contrived setting (and despite the irony that I had to ride in a car to get there), was too compelling to pass up. So I dragged my crew all the way up there for a three-day visit.

And, what a beautiful three days!

To my children’s delight, there are still plenty of horses on Mackinac. They pull the “cabs” and sightseeing carriages that ferry tourists and also do the bulk of the hauling and delivery. But bikes are the most common form of transportation on the island. Bikes are everywhere: available for rent by the thousands, parked in front of every business, covering porches, filling the streets. It is amazing. 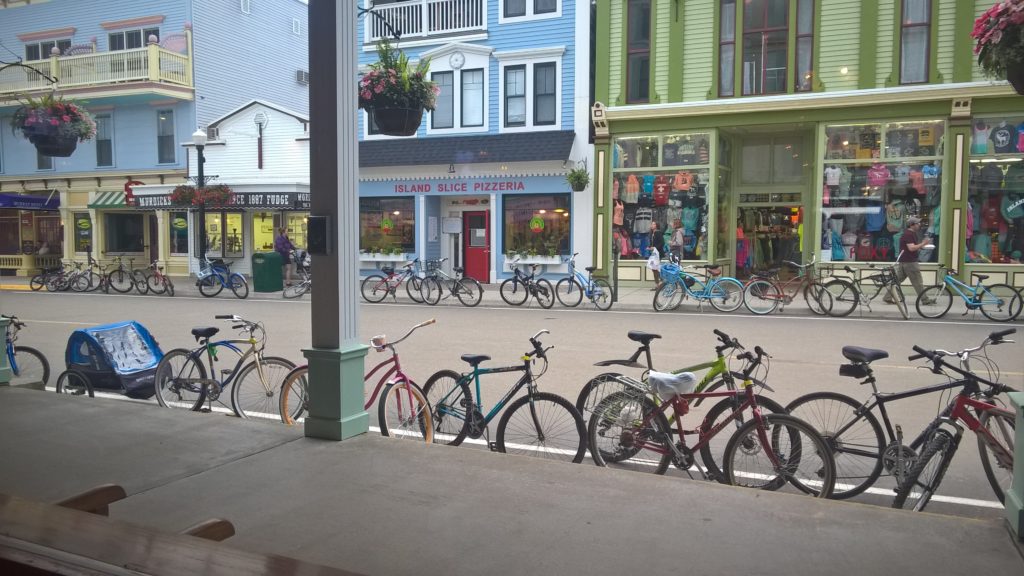 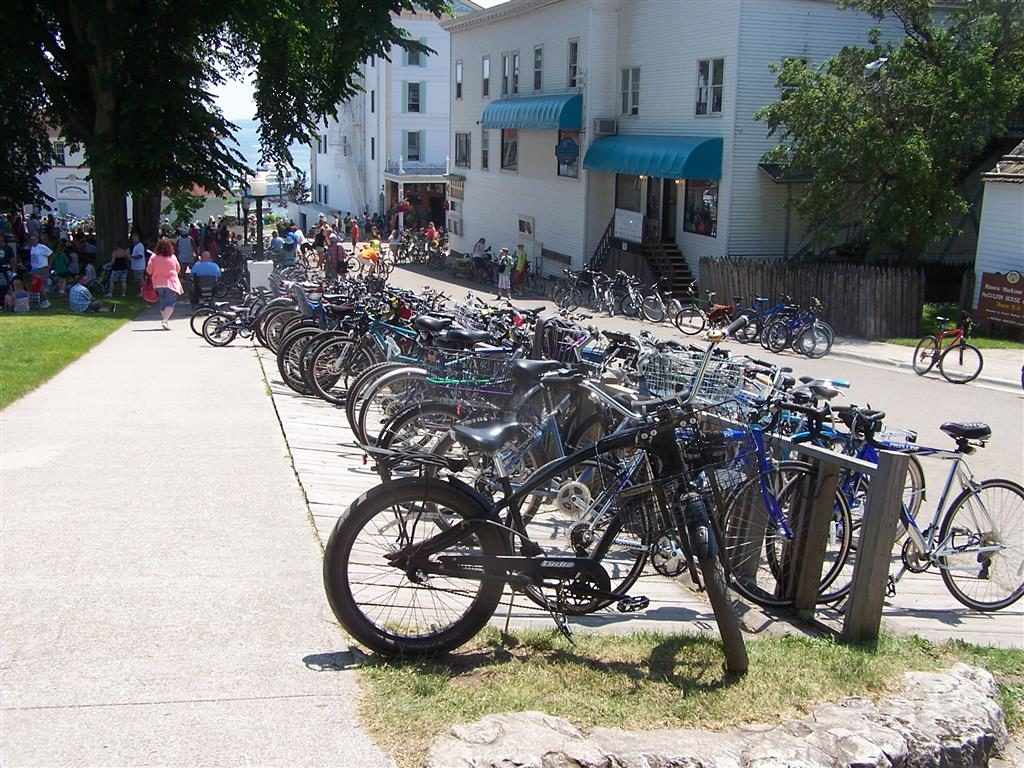 One of the most striking things about Mackinac was the quiet. Without the constant roar of traffic, you could hear the sounds of people. There was a band playing at the public park near the ferry dock on the evening we arrived, and the sound carried all over town. The quiet also allowed us to enjoy the near-constant clip-clopping of horse hooves. 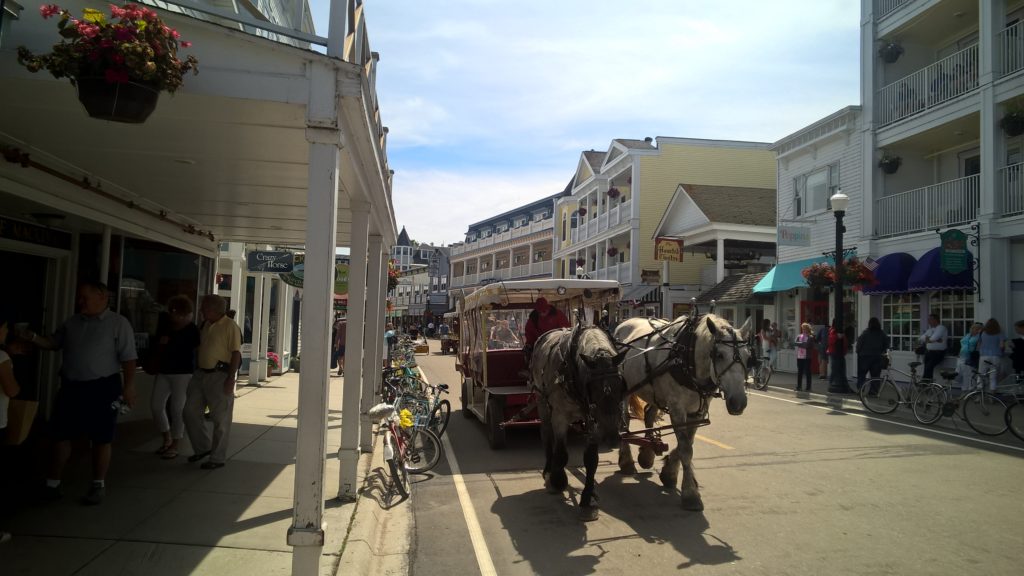 Our first morning on the island, we got up early and biked around its perimeter on M-185, the only US highway where motor vehicles are banned. 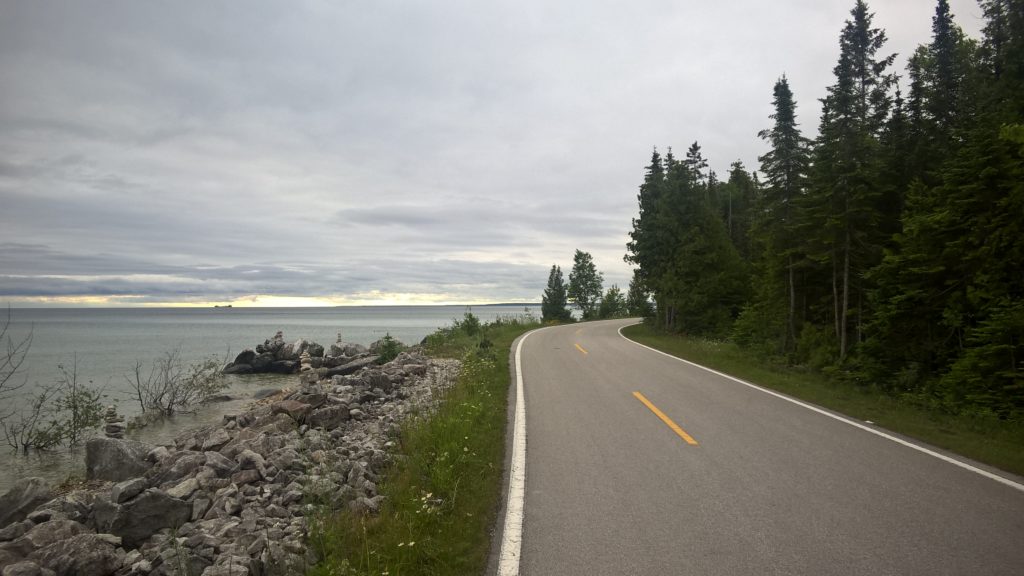 M-185 (aka best highway ever), very early in the morning 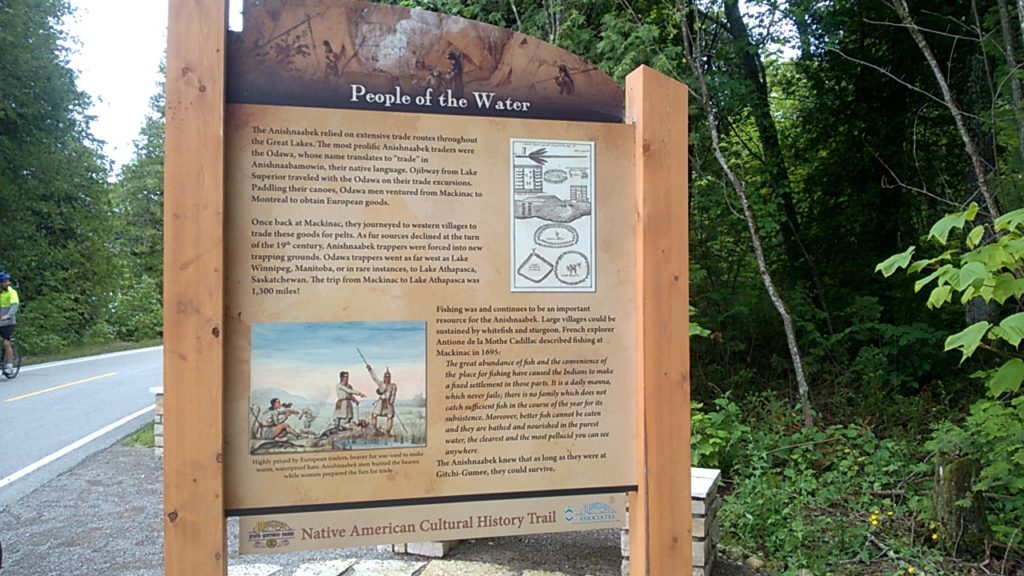 I don’t have the right words to describe how it felt to just ride, without the fear, without the constant vigilance. I never had to worry about a car crossing the center line, or following too closely, or turning into us in an intersection. In other words, I never had to worry about dying (any more than I usually do, that is) in the course of my travels. Instead, I focused on the beauty of the island, the feel of the wind on my face, the pleasure of zooming along under my own power. The kids loved it, too. They never had to get off their bikes to cross a road or look and look and look and listen and then tiptoe past the parked cars and look again. All of us rode freely and with total joy.

After that first ride, I was desperate to get back on a bike ASAP. We spent more than we should have on bike rentals, because I could not get enough of that feeling of freedom and exhilaration. On our second rental, I even let Busling convince me to skip the helmets, since, as he pointed out, we were the only people on the entire island he’d seen wearing them. 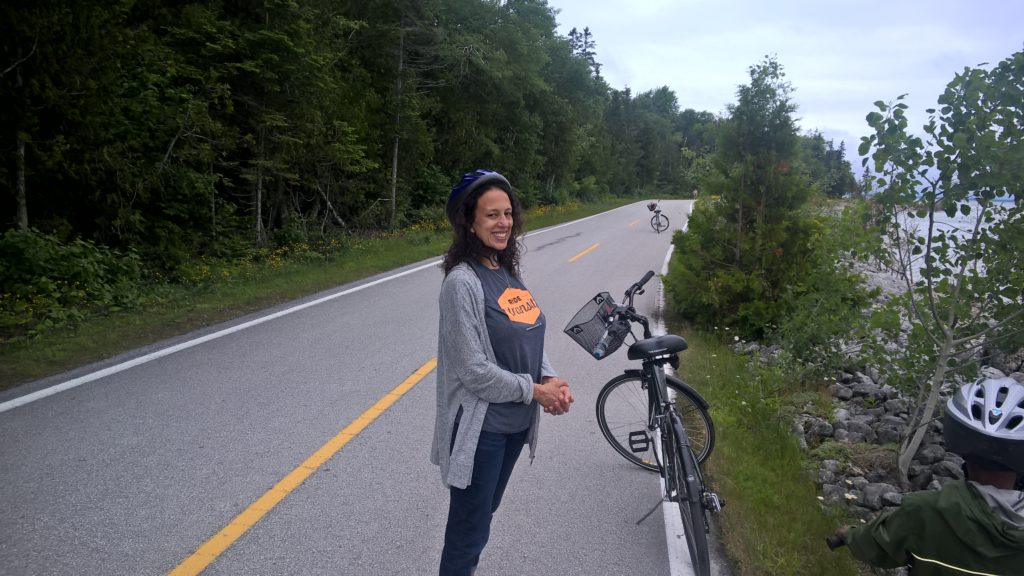 Couldn’t stop grinning, even before I agreed to ditch the dorky, ill-fitting rental helmet

Those few joyous rides made me realize that I had never, not a single time in my 45 years on this planet, ridden a bike without worrying about encountering a car.** And they reinforced the fact that what stops me from riding more often when I’m at home is not helmets or rain or even hills; it is the absence of a safe place to do it.

Since we’ve been back in Seattle, I’ve done it anyway, finally fulfilling the promise I made to myself back in 2016. We replaced the kids’ old bikes with bigger ones (with gears and hand brakes!) and so far have ridden almost every day this month. Sometimes it’s just in circles at our local park, but sometimes, it’s to actual destinations. We’ve ridden to church on the Greenway two weeks in a row and have made several bike-based grocery runs.

I know I won’t be able to recapture that feeling I had on Mackinac. I also know that transportation infrastructure in cities that exist for reasons other than recreation will necessarily be very different from transportation infrastructure on a vacation island. Still, Mackinac Island has a lot to teach us about how to make our cities more livable for all. In addition to pretty postcards, I brought home with me a commitment to be part of a culture change that will lead to more safety and freedom in the “real” world.

See you in the streets! (Actually, probably on the sidewalk.)

* Those of us whose oppression is inextricably linked to those bygone days tend not to romanticize them. The current situation is bad enough.

** There were a few times when one of my parents put bikes on (or in) the car and transported them to a recreational path, but don’t count those.

Back in October, I told you about Vincent Kartheiser, a handsome and successful actor who lives in LA but prefers to ride PT.

Today, I bring you Bryan Scott, the bike riding Buffalo Bill who chooses two wheels to commute to practice.

Watch these 15 short films, and you’ll be feeling festive, too.

My favorite’s still the one about scraper bikes, thanks to my penchant for macked out vehicles. What’s yours?

Update: Sightline’s got an Earth Day video (well, a video slideshow) too. It’s worth watching just for the spectacular scenery (so many reasons to ride!)–oh, and the buses and trains.

Starting on February 6th, you’ll be able to load your bike in the Ride-Free Zone at any time of day. I’m not much of a ‘bike+bus’er, but I did learn about the “no loading downtown during rush hour” rule the hard way several years back. The second time I ever tried to put my bike on a bus, I tried it at 7 AM at the stop in front of Benaroya Hall and, to my dismay, got publicly corrected by the driver. (Of course, I learned later that it could have been much worse.)

My multi-modal days are over for the foreseeable future, (not that they’d ever really begun) but, to all my bike-nerd friends who will benefit from this change: Happy (downtown) riding!

The folks at Streetfilms have (yet again) done something cool: They’ve asked livable streets advocates from across the country and world to select their favorite Streetfilms of 2009. If you’re looking for some quality vacation entertainment, you can find the entire list, including my pick (hint: candy paint ain’t just for cars), here.

A few weeks ago, my employer sponsored Bus to Work Day at Overlake Transit Center. It was a fun Friday distraction, with representation from transit agencies and commute specialists, free food (including chocolate-chip cupcakes!), and a prize drawing. I entered the drawing and then promptly forgot about it–that is, until Wednesday, when I found out that I’d won a brand new, shiny, red folding bicycle.

One of the (many) reasons I rarely ride a bike is because there is no outdoor bike storage where I live. (The hand-me-down mountain bike that Bus Nerd hooked me up with is currently languishing in his office, awaiting a dusting off in time for Bike to Work Day. But I digress.) A folding bike is a perfect solution because I can store it inside–in a closet, or even under the bed.

The bike I won is a Dahon. I don’t know much about bike manufacturers, but so far, I like what I’ve seen on the company’s website:

Dahon was founded with the singular purpose of convincing more people to use environmentally-sustainable forms of transport. To accomplish this goal, we’ve focused on creating innovative but reasonably-priced folding bicycles.

I also love the design. It’s compact and fairly simple to open and close.

My new bike, open and ready to ride

Less than a minute later: my new bike, folded and ready to store

Of course, I don’t know how it rides yet, having only tried for a couple of minutes in front of my office on Thursday afternoon, and I’m not sure how well it will work for multi-modal scenarios. When I tried to take it home from work (in its folded state) on Thursday, the 545 driver told me I couldn’t bring it on the bus. I didn’t have time to unfold it, and I wasn’t convinced that, given its small wheels, it would fit on the regular bike rack. Lord knows I wasn’t trying to experiment on a bus full of impatient commuters. He finally allowed me to store it under one of the lifting seats in the front. At Montlake, I was nervous getting on the 48, but that driver let me on without a word.

I’ve seen folded bikes on the bus before, but I don’t know what the official rule is, or even if there is one. Until I know for sure (or at least until I’ve had a chance to see if mine will fit on regular bike rack), I’ll keep it in the coat closet and use it for the trips I’ve been wanting a bike for: regular errands that are too far to walk in a reasonable amount of time but are inconvenient by bus. Oh yeah–and trips to Cupcake Royale.