On November 19, 2019, my friend, Annie Lamb (known to me always and only as “Mrs. Lamb”), died unexpectedly. Today would have been her 80th birthday.

Annie Louise Cheatham came to Seattle an orphan. Her mother, Nina, died from an infection, which developed after an injury she sustained while washing other people’s laundry. I’m not sure how or when Annie’s father, Hiram, died.

After they lost their mother, Annie and her sister, Margaret, came to Seattle to live with their older brother, who was in the navy. In 1960, she married Thomas Lamb. In 1966, the couple bought a home on Madrona Drive, across the street from a 2 stop.* For the next 53 years, Mrs. Lamb was a 2 rider. She rode the bus everywhere—to shop for groceries and clothes and household items, to take her children to school and appointments, to work, to visit friends and family.

I met Mrs. Lamb in 2005, when I started attending Good Shepherd, the church where she’d been a member since the 60s. Over the 15 years we shared a congregation, I grew to love her. Here are some of the reasons why.

The 2 isn’t one of my family’s main routes, but pre-COVID, we rode it at least a few times a month. Sometimes, we would run into Mrs. Lamb on our rides, and it was always such a delight to see her in her element—with a shopping cart or a punch bowl or a bag of Christmas play costumes to drop off at the church.

When she joined the ancestors, I knew immediately how she needed to be honored. Just in time for her birthday, that vision become real. Thank you to the family of Beulah Dyer for the inspiration, to Mrs. Lamb’s son Mike for the photos, to Steve Tucker and Jaivier Forward for the beautiful design, and to Dale Cummings at Metro for making it happen.

Rest in peace, Annie Louise Cheatham Lamb. The bus isn’t the same without you.

*Incidentally, this is the same stop where I used to wait to catch the bus home from elementary school in the 80s. There’s a good chance we waited there at the same time at least once.

**Margaret. Bell was an amazing woman as well. She was the sweet to her sister’s salty, and she was also a bus rider. She died in September of 2019 and is missed by many, including me.

***To make herself visible on dark winter evenings

If you’ve visited this blog more than a few times, you might already know that I am obsessed with (among many other things) bus shelters, art, and Seattle history. So, I was pretty excited to attend the unveiling of the Jimi Hendrix-themed bus shelter–at the northbound 48 stop at 23rd & Massachusetts–last November. (Yes, November. I’m still catching up, OK?) Unfortunately, thanks to a prolonged illness (and the whole new person in our family thing), I didn’t make the big event. The good news is, there’s a video.

Since the shelter opened, I have zoomed past it on the 48 dozens of times, but I have never had occasion to wait there. That is, until last Friday. 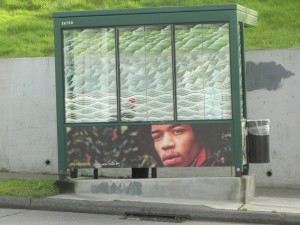 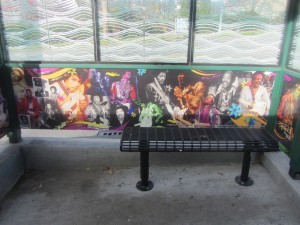 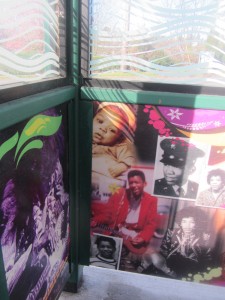 Jimi Hendrix Park is just up the hill from the shelter and is currently undergoing a major transformation. The Northwest African American Museum is on the same grounds. Seattle folks: Might be time to hop on Metro’s Heavyweight and pay all three a visit. 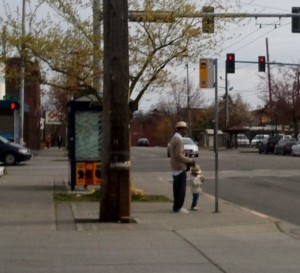 The competition was pretty stiff this year (folks at every bus stop in the neighborhood were dressed) but these two looked so sharp, we had to stop and give them props. Even Chicklet was impressed. 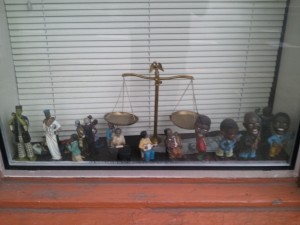 My small people have been enjoying these dolls, displayed in a ground-level apartment window on one of our well-beaten walking paths, as long as they’ve been aware enough to look around. Chicklet’s favorite is the dancing couple in the back. Busling likes the guy with the “insrament.”

This will teach me to choose a home based on its proximity to bus stops.* 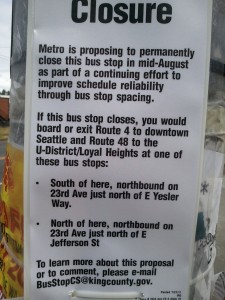 I’m more than a little irritated that Metro posted this notice in August and then never even responded to the feedback they requested–mine or anyone else’s.

I get all the stuff about stop consolidation and blah, blah, blah, and I will even admit to being a bit of a NaMBS (as in, “Not at my bus stop!”) about this. But there are legitimate reasons (other than the fact that I really need it) that this stop–and the one across the street from it–shouldn’t be closed.** If Metro doesn’t consider the reasons legitimate, they should explain why.

*I should have gone with my instinct and moved near a Link station. Call me crazy, but I wanted to stay in my neighborhood.
**And hey, if they’re looking for stops to close, there are two stops less than a block apart slightly further north.

This weekend, I’ll be sharing what I know about busing with babies at a family transit workshop sponsored by the Squire Park in Motion Program.

What: A casual, kid-friendly workshop where parents can learn: “how to know where the bus is going; when it will arrive; how to keep kids entertained; what to carry with you for the trip; and other helpful things to know when riding the bus.”
When: Saturday, August 6, 10 – 11:30 AM
Where: Central Area Motivation Program, 722 18th Ave (served by routes 2, 3, or 4)
How much: Free!

Kids are welcome, of course, and there will be door prizes (zoo passes!) for the first 10 families to arrive. All particpants will receive a handy family transit guide to take home. Hope to see you there!